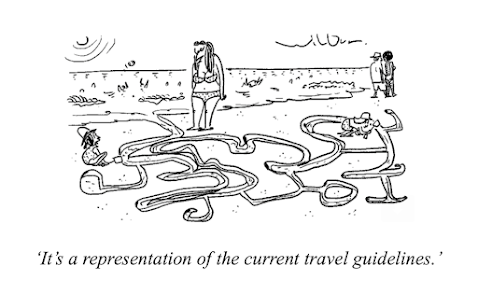 I have some trips to look forward to in the near future: five fascinating and rather distinct cities, all in this hemisphere.

I find however I am already more jittery about these journeys than others I have made since the pandemic started.

Indeed, when I look back on my trip to Mexico last March I'm amazed that I was brave enough to do it before I'd been vaccinated.

The virus did appear to be suffering a temporary dip in form at the time and the absence of crowds and the protocols observed at the airports and by the airline were reassuring, as were the half-full flights.

Yet when I flew to Newark in June the carrier made no similar effort to prevent everyone standing up in the aisle at the same time, nor did the cabin crew distribute alcohol gel, though they did enforce the mask mandate. As elsewhere, one could hear the increasingly audible patter of creeping complacency.

The situation mentioned in the previous post provides ground for additional anxieties. The partially-vaccinated friend I mention there contracted covid while wearing a mask during a hospital visit.

At least we are not as burdened in this part of the world with the complexities of the UK's travel guidelines and testing/quarantine requirements, although I do still feel personally burdened by them as they continue to prevent me from visiting family and friends across the ocean.

Still, by vaccinating with a degree of enthusiasm the Brits have arrived at a situation that looks a lot more like old-normality. The current complexities of travel are inevitable given that we now have a kind of three tier world of the almost immune, the hardly immune and then the countries whose immunity is basically fake, because they have achieved it by boxing themselves in without much of a Plan B, apparently.

In this perhaps China can be more easily forgiven, relative to say, Australia, because they are going to need something like 3bn doses of vaccine to get close to the required levels of immunity.

There was a worrying article in today's Guardian which quoted Sandra Carvão, chief of tourism market intelligence at the UN World Tourism Organisation (UNWTO), who noted that there are approximately one billion fewer tourists floating around the world these days than in 2019 and that “We are back to levels of travel we saw 30 years ago" — which could lead to a $4tn GDP loss overall across the globe, a vast human cost and little hope for any sort of recovery before 2024.

"Developing countries are predicted to take the biggest hit, with Central America suffering the most", the piece concludes.

Posted by Inner Diablog at 3:33 pm