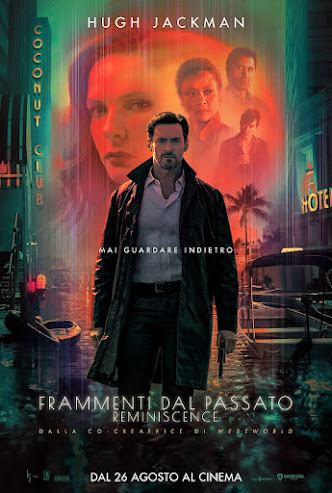 This Italian poster is suggestive of the chin-scratching potential of this movie. Granular time. Call in Carlo Rovelli...

Visually, and to some extent intellectually, it appears to have much to offer. But all this is smothered by the unfledged flow of the drama and the frustrating blobbiness of the characters.

Perhaps then, no surprise that the writer-director is the producer of Westworld. (And she's borrowed a pair of her favourite demi-humans.)

I suppose in essence this is The Drowned World meets Who Framed Roger Rabbit? It made me think of Kim Novak in Vertigo as compared to Rebecca Ferguson here, playing a slightly less 3D version of Jessica Rabbit.

On paper the plots of these movies would both sound contrived and silly. Yet, during first viewing, Hitchcock made me engage with his protagonist and his dilemma in a manner that I sorely missed here.

Sadly the sci-fi noir storytelling clichés end up completely inhibiting the narrative in Reminiscence, which is an utter shame, and throughout the running time I found myself longing for more of the background, those incredible set piece vistas of inundated Miami, rather than the distraction of the mopey femme fatale journal at the forefront.

Posted by Inner Diablog at 9:35 pm