This is a movie that is trying to be several things at the same time and if one seeks out the reviews it has already had, the consensus seems to be that it succeeds at being none of them. 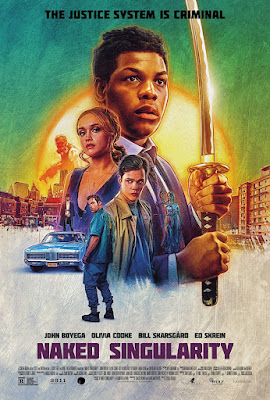 I have no idea if the source novel by Sergio de la Pava serves up a more successful blend, but let's assume the additional space available to the author allowed him to make more of some of the thematic weirdness that has been attached to the heist plot — and that all that stuff about social justice, alternative realities and the cosmic fabric collapsing into or perhaps out of a singularity, was delivered with a bit more coherence and heft.

Anyway, whilst I kind of have to in principle agree with those of the critics who have thrown their arms up in despair, I couldn't help but enjoy this movie, and in the end that has to be chalked down to the likeable quartet of non-American thesps that are fronting it, with a special mention for Olivia Cooke as Lea.

They add a certain comic charm to proceedings, which complements the kookie sensibility of the story and allowed both of us to avoid getting all het up about anything going on beyond these characters.

Posted by Inner Diablog at 7:46 pm