If 2020 was the year of better than expected B movies, 2021 may prove to be that of rather dull and disappointing A movies.

There are certainly people out there who are just glad to be back at the multiplex watching stuff getting blown up.

I'm not one of them and I have never really been a fan of superhero movies, though recent experiences with Black Widow and The Suicide Squad have tempted me back to the genre in spite of the agonising disconnect from anything approximating to the real world and its arduous issues. 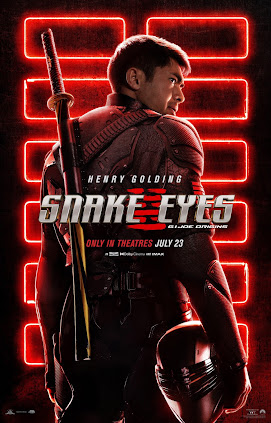 As franchise reboots based on toys go, this is far from execrable.

But it lacks anything comparable to the invention of the aforementioned flicks, in effect loading up on tenderised clichés from more adult fare — notably The Villainess and Kill Bill  — and then adding a 'nuclear gem' prop worthy of 70s Doctor Who.

That a potential summer blockbuster can be held up, in the main, by a group of British East-Asians is maybe something to applaud. Henry Golding in particular seems to deserve something more than romcoms, though his performance here is a bit one note and he's let down by a screenplay that singularly fails to commit to whom the audience ought to commit.

Posted by Inner Diablog at 8:31 pm