Any would-be film adapter of the Arthurian cycles has some interesting choices to make. Should this world look more like the Dark Ages or perhaps the period nine centuries later when the 'romances' were thriving. Should it look like the Middle Ages or how the Middle Ages saw themselves? Should it be more Celtic, English or French in sensibility?

I think David Lowery has found a happy enough medium here. I particularly liked the way The Lord's castle where Gawain finds himself tarrying resembles one of those buildings in late medieval illuminated manuscripts, the graphical novels of the genre.
Yet if anything, it's the feel rather than the look that is all-important. The more successful and memorable renderings of Arthurian lore are explicitly weird and oneiric to the point of disturbing — Excalibur (1981), Monty Python and the Holy Grail (1975), Wagner's Parsifal (1882), the original 1973 adaptation of Gawain etc. — whilst those that treat these tales as straight, if bogus history are almost always immediately discardable.
I'd be lying if I said I didn't suffer from spontaneous recall of this scene during my viewing of The Green Knight.
'Now we see the violence inherent in the system...'
That movie was as much homage as spoof, rather like Don Quixote, a work we know Terry Gilliam has a particular fixation on.
And Terry Jones was deeply immersed in the absurdist tropes of the chivalric quest, having written both a convincing de-bunking of the self-image of Chaucer's knight and the screenplay for Labyrinth (1986).
Full disclosure: I too am a total fanboy having spent much of my youth devouring this stuff from the original texts through to the various nineteenth century poetic re-imaginings.
Lowery brings his own package of ironies and dark humour to his script. The 'go and get my head' sequence in this movie is the one that has the most overt Pythonesque overtones, with some deliciously dry lines written for Winifred in particular.
There is much of the same playfulness we witnessed in A Ghost Story (2017), where the director had the recently-deceased Casey Affleck haunting his former residence covered in a white sheet. 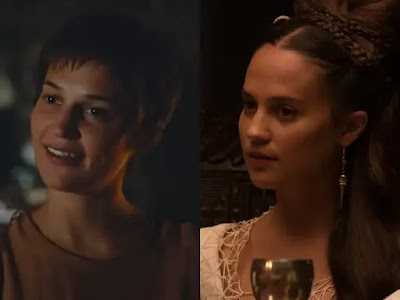 In most of the significant categories that receive awards at the Oscars this movie is excellent. There are captivating performances from just about everyone with a speaking part and there really can have been no better choice for the role of Gawain than Dev Patel.
But it also has qualities which cannot be hinted at by IMDB listings and I would hesitate to provide any sort of detailed exegesis here, as much as I would with say Parsifal.
Beyond the fact that for the anonymous author of the source poem Gawain was pure, yet just dishonest enough to survive the game, and Lowery appears to be suggesting an inversion of that disposition in his update.
He has understood that there is no authorised version of these stories sitting there waiting to be remade. Every incremental adaptation has added something new or borrowed.
And this one is beautiful.

At the end of his review for the New York Times A.O.Scott suggests that a second viewing is almost mandatory.
And it's true that we do now feel this need to circle back as it is only at the conclusion that Lowery provides the (almost) finished key to understanding how he has moved beyond medieval allegory into more modern dilemmas and ambiguities.
Yet if we do watch it again, we'll be partaking of a privilege one never has with actual dreams, especially those that appeared to make an urgent kind of sense whilst we were asleep, yet rather less so the moment the credits had rolled.
Posted by Inner Diablog at 7:00 pm