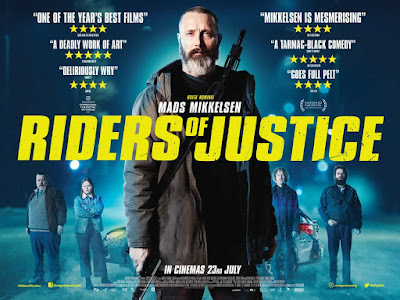 Take a look at that poster. If  'deliriously wry' seems ticklish, then this movie will probably work for you.
I was almost put off by Dr K's reviews until I remembered his track record on comedy. Danish humour is like a niche version of British humour, in much the same way that Geordie is a niche version of TV English or indeed like Danish hooliganism, aka Roliganism, with its emphasis on well-mannered stoicism and, oddly enough, still a very close relation.
Calmness is perhaps under-rated in contemporary comedy.
Here the Danish sense of humour is at its most deadpan, with a clear emphasis on dead. There's quite a lot of violence, in the main served up by Mads Mikkelsen's Afghan vet Markus, who is set on a trail of vengeance for the high probability murder of his wife.
And it is this lack of absolute certainty that permits director Anders Thomas Jensen to play with the tonality in a manner some may find just a bit too much like discordant clamour and commotion.
When Another Round was finally released to British cinemas a month or two ago I was reminded by the delayed critical appraisal just how wonderful it was and how these days I'd be truly happy to watch pretty much any movie with Mikkelsen in it.
Here, once again, he forms part of a quartet of would-be subversive middle-aged males, this lot even more frayed around the edges, an unlikely relay team with a tendency towards lane violations...rather like the movie itself.
Rarely has hacker culture had such a (dead-pan) deliciously wry comic re-appraisal... 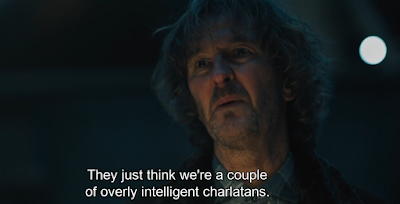 Posted by Inner Diablog at 6:16 pm