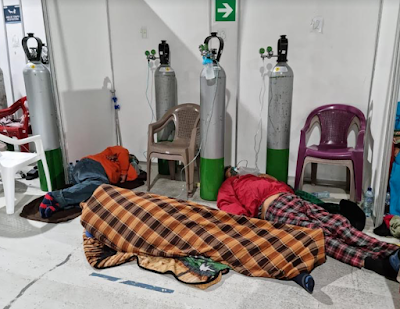 Even in Florida hospitals exceeding maximum surge capacity remains a hypothetical, albeit one that is fast approaching reality.
Here in Guatemala however, the worst case scenario is no longer just a scenario.
Perhaps hardly anybody in the developed world will notice, but it can and should alter some of the main inputs into the lockdown debate.
For wherever scenes like this remain a might-have-been, they retain the qualities of an imagined horror that libertarian mouthpieces can describe in terms akin to doom-mongering.
The jury is still out on whether lockdowns actually work, they scold.
Last year Guatemala enacted strict covid control measures — in effect a partial lockdown — to some good effect, but then lacking the ability to borrow on the same epic scale to compensate the idle parts of its workforce, now seems to lack not only the money trees but also both the political will and the economic capacity to re-impose even the most basic and necessary restrictions, as the virus in Delta form ravages the population as never before.

Posted by Inner Diablog at 7:31 pm

More than one U.K. hospital teetered on the brink, during both the first two waves. Their desperately low supplies of oxygen saved only by shipping new and existing patients elsewhere. Had disaster struck, I have no doubt that the lockdown sceptics would have blamed it on the lockdown…

Have you seen the leaked emails/messages from the HART group? They need locking up, quite literally.

No, not seen these . Will seek. The ironies here are intriguing. One could say that I have deliberately sought a life where my decisions affect others only positively, if only indirectly. Yet there are people like Tobey Young and so on, who feel that their brand of selfishness is somehow superior!