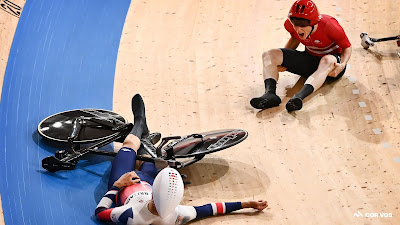 Things didn't exactly get off to the best start in the velodrome this time, but have taken a turn for the better since. All I really wanted to see was Laura Kenny at her excellent best winning that third Gold in three consecutive Games and thus deservedly becoming our greatest female Olympian. The crashes have been kind of entertaining too.
Cycling — perhaps the one Olympic sport where the shenanigans (rather like Formula 1 and the Australian version of cricket) are part and parcel of the appeal. That the road race last week was won by an Austrian mathmo falls some way short of 'cheating' in the strictest sense, ditto that unfortunate coming together coupled with spicy language in the men's team pursuit, yet might be considered all very much part of the necessary accoutrements.
Speaking of which, when Maurice Garin won the inaugural Tour de France in 1903 — a feat he repeated the following year — he had been supplementing the aerobic effort via judicious use of a train ticket.
The skateboarding has been an interesting new edition. It too features that  compelling mix of physics-defying excellence and fairly frequent mishaps, leading to the 'shedding of skin'. (The determination of some not to don protective padding of any kind sat somewhere between admirable and crazy.)
'Backside Air' — who knew that there would be Olympic medals available for that?
The format possibly needs some tweaking. It would be churlish of me to moan about home advantage after London 2012, but the Japanese took it to the next level here. In the women's (girls'?) park event the three Japanese girls and our half-Japanese girl were in a different class to all the other competitors, which led me to speculate that they might have had a lot more practice time on the park.
The men's event came as something of a relief as it was a) won by someone who appeared to have put puberty in the rear view mirror and b) there were no locals amongst the finalists.
It will be interesting to see how the skateaboarding shapes up in Paris. Fewer under 13s and over 40s would possibly be ideal. And maybe the Brazilians will have realised that this is a quadrennial elite sporting competition and not just a cool party. 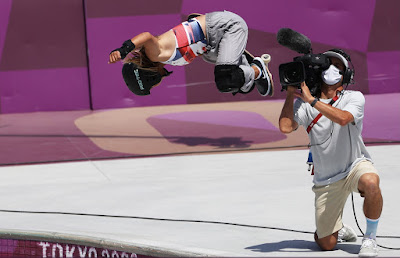 Sky Brown says she wants to represent Team GB on a surf board as well. The waves on the Seine being what they are, the Paris 2024 surfing competition will take place in Tahiti, so she might struggle to compete in both that and the park skateboarding at the next Olympics, by which time she will have reached the grand old age of sixteen. Her brother Ocean, aged nine and already the proud owner of a six-pack, might also be there.
The scoring has been purposefully calibrated so that the women know just how much they have to improve to catch up with the standard in the men's competition. The gap is currently significant, but will surely be closed at future Games not set in Tokyo.
The BBC commentary, one middle-aged man in a loud shirt over-emoting over teenage flips and someone who sounded disconcertingly like Ozzy Man were perhaps optimal for the inaugural Olympic meet, but going forward, a bit more youth and perhaps more restraint, would be preferable.
Maybe they were over-compensating for the lack of a crowd, which should not be such an issue in 2024. Fingers crossed.
Keegan Palmer's Gold in the park skateboarding led to Australia briefly overtaking Team GB in the medals table, but with one day to go there's clear air between us once again, thanks in no small part to a truly wonderful horsey in the Modern Pentathlon.

We need to be wary of the not-Russians still as they have amassed more disappointing second places than us, but there's no shame in ending up behind them, especially as they tend to have a virtual asterix next to many of their medal-winning performances.
I suppose that one of the reasons I enjoy this sporting cycle so much is that in my head I am British first and English second. The football always comes with a dose of doubt and self-examination. But the Olympics, with their (slightly) more muted tribalism and xenophobia, gel more closely to my own sense of national identity.
Posted by Inner Diablog at 7:50 pm