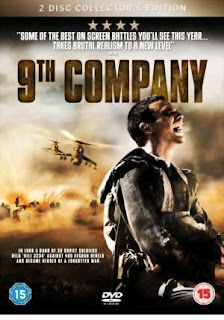 Some lads from Siberia with contrasting outlooks sign up to participate in the Soviet occupation of Afghanistan. They bicker and bond in the barracks as they are turned into a serious fighting unit by the inevitably gnarly sergeant-major.

Then they are dumped into the dusty horror of that war and, in a final - and, as it turns out pointless - battle with the fanatical natives, they fight and die. All but one of them that is.

It's interesting that the Russians are now able to project their reflections on the USSR's Afghan adventure through the medium of such a familiar American formula, perhaps more so because of the timely nature of this examination of the persistent nature of invaders' failure in this particular land.
Posted by Inner Diablog at 4:26 pm