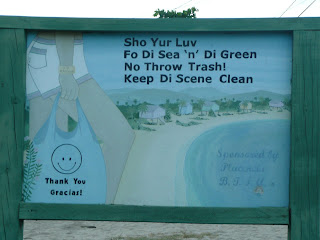 Has boomed quite a bit since I was last here in September '89.

As on Caye Caulker the fatties on golf carts have established themselves (plus a few yachts) and the population - once only a couple of hundred and most clearly related to each other in some way - has expanded five times or more, without it seems an entirely proportionate increase in the overall touristic opportunity...but maybe I'm saying this because we're in the off-season right now.

Something also seems to have happened to the beach. Tulum it never was, but di scene isn't all that clean and a good deal of di sand seems to have been lost to di starmy wedder. (Later on I will try to dig up some of my pics from '89 to show the Before and After states.)

Needless to say, turtle is also off the menu these days. Still, the causeways, talkative parrots and the dazzling night skies all remain.

Back in the 80s the dirt road linking this little settlement at the tip of a long sandy spit to the main highway from Dandriga had only recently been etsablished. Someone then dished me the almost certainly apocryphal story that the population of Placencia were all descended from a crew of Portuguese pirates that had got jiggy with the local Garifuna. The incidence of dreadlocked men and women with beautiful dark-honey skins and green eyes gave some credence to this tale, but sadly the current batch of locals don't look much different from the bulk of Belizeans.
Posted by Inner Diablog at 2:25 pm