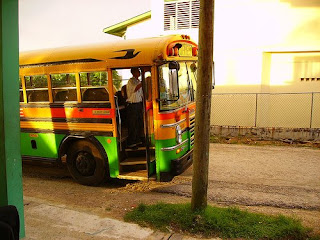 When I compared Belize and Guatemala's bus services the other day I forgot to add that the apparent mayhem down in Chapinlandia can all be blamed on neoliberalism...if you are that way inclined. This is because the bus services in Belize (James Line here in the south) are virtual monopolies, and up in the north I think some have even been re-nationalised.

Contrast this with the carreteras leading out of Antigua where 3 or 4 different bus companies compete for the passengers waiting at the side of the road. (Actual bus stops would be too interventionist).

Each time a bus stops to pick up or indeed drop off one passenger, it runs the risk that the competitor service behind passes it, thereby gaining access to potentially richer pickings ahead. So we can in effect blame market forces the way old ladies with bulging tanates are occasionally disembarked with a shove!

Incidentally, the chickenest of all chicken buses I ever took was the service running from Santa Elena (Petén) and El Naranjo on the north west border with Mexico. Aside from Surfer and me, everyone else on the bus was either a prostitute or a member of the PAC - an armed peasant militia set up originally by the milicos in the 80s to help combat the guerrillas. The ones on our bus weren't armed at the time but as we got down the army were handing out rusty old rifles and it was all very amusing when they made as if to conscript the pair of us to the PAC too.
Posted by Inner Diablog at 2:46 am

Man...I love chicken bus culture. Some of the best times we've had in Guatemala involve riding these buses. I LOVE when we are suddenly all told to duck down...or when some little kid makes eye contact and you get to smile even though your ass is killing you from slamming up and down on the hard seats in the back.