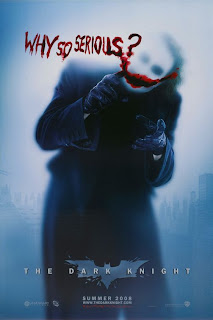 Why so serious indeed. The plot here appears to have been constructed as a kind of moral adventure playground in which each of the three main male characters can explore whether there might be a place for them in the real world, and not just in some DC Comics alternate universe.

Heath Ledger's Joker is the most successful participant: a very disturbing and indeed very realistic personage - and not just because of what we know of the actor's fate during post-production.

Bayle's Dark Knight is more of a misfit in this narrative environment. In costume he's just that freak who keeps popping up at key plot points, and out of it he's Patrick Bateman again.
Posted by Inner Diablog at 4:33 pm