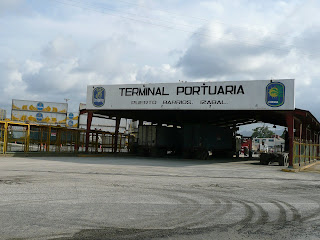 Is home to Bobby Banana and his mates.

Indeed, the wonky wooden hotel where I have tended to stay here over the years is located at the end of a muddy track between the Dole and Chiquita container yards - at what feels like an unsafe distance from the well-lit parts of town. Walking back to my room in September 1989 someone in the shadows hissed "estas muerto" (youse dead) at me.

The nearest place to get a beer outside the Hotel del Norte is a choice little venue called Night Club Medellin. This isn't the kind of tropical climate that the brochures rave about. Think perma-sweat and your own private squadron of flies. I think I'm going to find Antigua decidedly chilly when I get back.
The dining room inside the hotel is worth the cost of the room though. This time I was attended by the same old bloke who served me up a wonderful maletita de frijoles back in '89. He hasn't wrinkled up all that much - though he must be in his late 80s now and claims to have worked there for 40 years - but the black beans are now of the Ducal/Natura type, not home-made like they used to be.
The Caribbean coast of Guatemala is around 250km from our house. Not such a hike you might think, but the road is narrow and passes through some very bulbous countryside. On this occasion I took one of the comfy Litegua double-deckers featuring aircon just on the wrong side of chilly, flat screens showing films you wouldn't otherwise want to watch (Rush Hour 3, Jumper etc.) and an armed security guard, literally riding shotgun. The journey took 5 hours, but included a lunch stop at Valle Dorado.

The black-sanded Pacific littoral is the alternative, lazy option, less than an hour's drive away. The nearest 'resort', known to the locals as 'Puerto', is fairly primitive in terms of amenities. The best option is the ever-growing and increasingly swanky Monterrico, further down the coast towards El Salvador, which now even features its own ATM, Scott tells me.

Between these two points there are a number of hidden pool and beach clubs for the super-rich, so well-hidden in fact that googling their names brings up no relevant pages online. I visited one a couple of years ago and found it rather like Puerto Banus on the Costa del Sol. The residents sit around in fabuously well-appointed apartments hitting the Bloody Marys from around 10am onwards. There are better things to do with wealth.
Posted by Inner Diablog at 2:23 pm

Awesome post. Goldman's "Long Night of the White Chickens" has similar obsevations of Barrios. I only really know it as the launching point to Livingston...and the home of a great waterfront, bungalow style fish restaurant specializing in mojarra frita, which they must catch after you order, it's so fresh and flavorful.

When in Monterrico, eat at the Dulce y Salado...fishermen bring fish up at 9:00 am and they're served at lunch. The shark ceviche along the main street is also amazing.