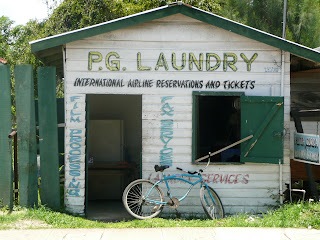 "The last place you'd want to run to," was how Punta Gorda was described to me by the young proprietor of 'Deja View'. Many towns in Central America have moved on since I first visited them in the late 80s. This one hasn't.

Even by Belizean standards Toledo district is a bit of a backwater. When this land was known as British Honduras the army used the fine British-made highways that head north and west from the then capital Belize City. They had no pressing need to come down here it seems.
I once heard it said that after Hurricane Hattie trashed that town the Brits offered Belize a choice. Either another great road down to the south or a new centre of government. And so arose Belmopan, a 60s elite-folly rather like Brasilia, though lacking the latter's architectural bravado....indeed it's a bit like finding the campus of Southampton University in the middle of the savannah.

They're still trying to finish paving the Southern Highway. Somehow I suspect that when work is completed this last recinto of the old Belize will be assimilated onto the eco-tourism trail and something will have been lost along the way.

An interesting aspect of the local demographic mix - other than the Mopan Maya and the Mennonites with their straw-hats, silly beards and in-bred demeanour- are the descendents of elements of General Lee's Confederate army that some flack persuaded to re-settle down here at the end of the American Civil War...on the basis that they would find in southern Belize a whole load of black men just sitting around waiting to be oppressed. This wasn't of course the case, but they appear to have stayed anyway.
Posted by Inner Diablog at 2:24 pm