Pretty much the entire history of humanity before 'modern times' was one of conquest, land grabs and enslavement.

These days it is fashionable among the uninformed to suggest that Europeans have been largely responsible for most of the reprehensible behaviour of our species in the past.

Perhaps what they are really saying though is that Europeans — without question largely responsible for most of the values now underpinning so-called modern times — were guilty of acting like ancients when seemingly already thinking like moderns.

The sin thus being greater because we should have known better.

The specific problem with Russia, as many informed Europeans today so seem to be aware, has long been that it is a nation with a superficially modern body playing host to a markedly ancient soul. 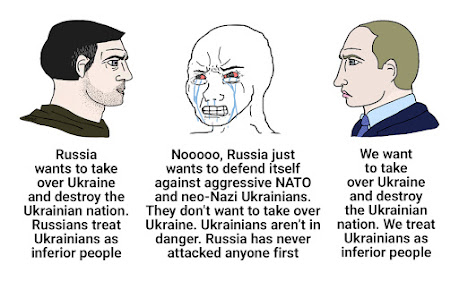 Posted by Inner Diablog at 3:55 pm