The Marquis de Custine and Russia in 1839.

Lasting Western European perceptions of imperial Russia and its intentions were firmly established by the middle of the nineteenth century.

A profound suspicion of Russian motives had been pumped up by Polish emigrés in London and Paris in particular after the Tsarist suppression of the nationalist November uprising in Warsaw in 1830.

Then, as now, Poland was seen as a last line of defence against the Bear and provided us Brits with one of our customary opportunities to posture as the continent's leading proponent of the 'little chap' in his fight against the big bullies.

The Russians were also busy suppressing liberal nationalist ventures in Moldavia and Wallachia, and would soon act against Hungarian autonomy as well.

This was the era when liberal democracy started to take a wider hold in Europe and Russian despotism was perceived as the principal reactionary threat.

In the following century when Russia seemingly switched to a superficially less counter-revolutionary form of imperialism, its influence continued to be understood as tyrannically anti-liberal. (When Karl Marx came to London as a political exile in 1849, he actively campaigned against Russia as the principal enemy of liberty.)

A travel journal by the Marquis de Custine, La Russie en 1839, is seen by many as a highly influential text in the lead up to east-west conflict. 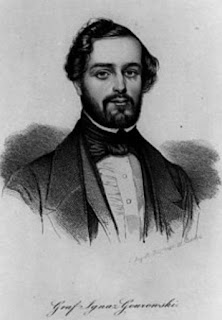 In Russia, the French aristocrat noted...

“An ambition inordinate and immense, one of those ambitions which could only possibly spring in the bosoms of the oppressed, and could find nourishment only in the miseries of an entire nation, ferments in the heart of the Russian people. That nation, essentially aggressive, greedy under the influence of privation, expiates beforehand, by a debasing submission, the design of exercising a tyranny over other nations: the glory, the riches, which are the objects of its hopes, console it for the disgrace to which it submits. To purify himself from the foul and impious sacrifice of all public and personal liberty, the slave, sunk to his knees, dreams of world domination.”

(And maybe a washing machine or two.)

“To have a feeling for the liberty enjoyed in the other European countries one must have sojourned in that solitude without repose, in that prison without leisure, that is called Russia. If ever your sons should be discontented with France, try my recipe: tell them to go to Russia. It is a journey useful to every foreigner; whoever has well examined that country will be content to live anywhere else."

In The Crimean War, Orlando Figes describes some of the impressions feeding into this diabribe, which do appear to remain relevant today...

“Everything about it filled the Frenchman with contempt and dread: the despotism of the Tsar; the servility of the aristocracy, who were themselves no more than slaves; their pretentious European manners, a thin veneer of civilization to hide their Asiatic barbarism from the West; the lack of individual liberty and dignity; the pretence and contempt for truth that seemed to pervade society”

Posted by Inner Diablog at 3:38 pm