The second movie we've seen in 2022 featuring a seminal example of what Mark Kermode has referred to as "Chekhov's nut allergy". (Perhaps my own spin on that would be Chronicle of an Anaphylaxis Announced.) 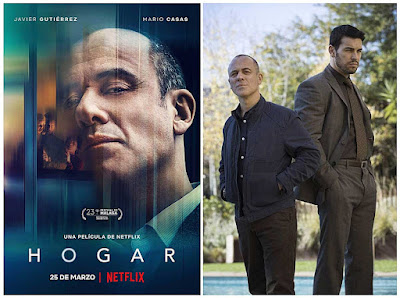 That's one of several important plot points in Hogar that are, upon later reflection, somewhat perforated or haphazard, yet none of them seemed to dent what was an extremely gripping thriller set on the bleeding edge between middle-class mundanity and "success".

Perhaps its singular quality is the performance of Javier Guitiérrez as a formerly high flying ad exec the industry has dispensed with for reasons of age and cost, who becomes creepily obsessed with the family that have taken over the swanky apartment he and his wife have been forced to abandon.

It begins with an ad from earlier in his career, establishing a grounding for what follows in the affectless psychology of urban aspiration. The English-language title on Netflix — The Occupant — rather takes one away from the implicit connotations of the narrative: the sentiment-draining tendencies of a certain kind of home.

There's a relentless nastiness to it and we found ourselves checking off all the reasons that, despite its obvious qualities, it will never get an English-language rehash. (Hollywood would be inclined to fix it in in the manner of The Vanishing.)

Posted by Inner Diablog at 3:28 pm