Movies shot in one single shot, without fakery, are a very limited sub-genre. The fakery usually adds a sense of technical showboating, as it did with Birdman and 1917, but the real deal, Victoria and Russian Ark (in particular) is usually dramatically very effective. And so it is here, though I suspect the effect is more superficial and inextricably allied with the tension — or shared stress — at the heart of this tale of a beleaguered head chef, restaurant and open kitchen during the busiest pre-Christmas evening of the year.

That this is a best viewed just the once* set-up is endorsed by the ending, which is very powerful yet in a sense diminishes some of what has come before, because it settles the issue of whether this has been a story about one man on the edge, or a collection of little tales about individuals within an institution, on the edge. 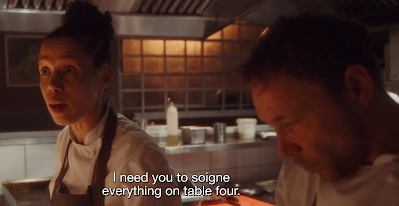 I had to reflect that some of the mini-dramas had been left incomplete and had functioned only as distractions allowing the director Phillip Barantini to re-tabulate his cast out of shot.

Barantini is best known as an actor (Band of Brothers etc.) and the depth in this movie derives principally from the performances rather than the dialogue. The likes of Stephen Graham and Vinette Robinson are absolutely superb here, especially when silent. (Jason Flemyng is also excellent as the TV celeb chef on a sort of personal black op, but he and his guest have also been served up some of the better lines.)

I was reminded a little of Sally Potter's The Party from 2017, but that had a superior screenplay, an ultimately more collective dramatic line, and was more prepared to explore the opportunities for explicit farce. But then as a restaurant critic observes in Boiling Point, one should be wary of critiqueing on the basis of that which is absent...

One critic, Mark Kermode, refers to one of the restaurant's customers that night as "Chekhov's nut allergy", thus referencing the Russian writer's famous observation that details in a story (such as the presence of a pistol) must ultimately contribute to the way the narrative develops i.e. if there's a gun amongst the obvious props, it's going to have to be used at some point.

But Chekhov was surely also aware that foreshadowing can be resolved in multiple and sometimes surprising ways. Here the nut allergy 'seed' germinates almost exactly as we could have predicted. I also ended up thinking about the changes that occurred in the British dining out scene during my father's lifetime. He was far from a man of simple tastes and was himself a pretty decent cook, yet increasingly found himself a little alienated by the menus he would confront, even in fairly informal English country restaurants.

At least until the 80s the very better restaurants in London served very good, yet unpretentious Mediterranean food. The only 'Asian' options were Chinese, which along with Indian restaurants were notably uncomplicated.

* This is an elongation of an earlier short film from 2019, also shot in one take, which I do now wish to see.

Posted by Inner Diablog at 6:54 pm