A new year, a new scene?

Back in the noughties I occasionally used to mingle with professional coolhunters. They were out and about long before marketing became more democratised through social media influencers, but they achieved much the same thing, just a bit less visibly —  covert investigators and manipulators of high-end consumer taste.

Sadly, there has never been much in La Antigua to make their sort hang around here for very long.

Antigua's 'scene' has so far passed through three distinct phases during my time here. In the 80s and most of the 90s, the most successful bars and restaurants lacked brands worthy of the name. Sure, they usually had a sign outside the entrance, but nothing much beyond that in terms of a coherent identity permeating the whole experience.

Perhaps the one and only bar in this city ever deserving the cachet of 'cool' was a tiny joint set within a grotto called Mojitos, which I recall lacked even a visible sign out on 4a Avenida Norte.

Riki's, the most widely popular if not exactly cool bar in town ever, had a hand-painted sign above the entrance to the counter area, and that was it. It was popular in a way that is now unreproduceable as it was in a sense carrying out some of the functions of digital social media today.

In the late 90s bona fide branded businesses like Frida's and Monoloco appeared. This, coupled with the heyday of printed magazines with full page glossy colour ads like Revue and Que Pasa heralded the arrival of the brandoscene epoch.

The most recent era here has involved what I tend to refer to as the over-grazing of the commons, a maxed-out commercial expansion combined with a widespread drop in the quality and variety of the overall offer.

The brands remain, but as the print editions of the magazines have effectively evaporated, pretty much everything has shifted online and become generally more vulgar and shouty.

It never ceases to amaze me just how utterly clueless some of the more high profile operations are here in their use of social media. Some of this is absurdly basic. (Like, if you don't locate your posts or locate them narrowly at the place of your business, you will hardly ever reach out to people who don't already know you are there.)

Anyway, I suspect there is a new phase in incubation now, which the pandemic might have brought forward, as it has with other stuff we'd otherwise pencilled into the nearish future, such as Zoom and home-schooling.

According to our 20-something sobrinos and sobrinas, some with 'public figure' aspirations, the new place to see and be seen in town — whilst getting attractively sloshed and noshing on not just any old crap — is Aqua.

I've not been, and am not sure I will, as the situation outlined in the above paragraph almost guarantees that there would be a serious danger of unsolicited social interactions.

Yet from Aqua's digital footprint I get flashes of the pleasingly familiar. Over the past decade I watched the transformation of the casco antiguo of Panama City from an only mildy-gentrified slum to a terminal of nocturnal cool. Something similar has simultaneously occurred in Getsemaní outside the old walls of Cartagena de Indias.

Victor Hugo del Pozo has lately been loudly touting La Antigua's status as pack-leader amidst the Latin American colonial-themed destinations, supposedly surpassing even the likes of Cusco. Yet if one examines the appeal of some of our other, more or less nearby competitors — Oaxaca, Mérida, SCDLC, Arequipa, Cartagena and so on — one finds one thing which demarcates them: there are loads more interesting things to eat at the mid-level than tacos, burgers, nachos, wings and pizza. (Not forgetting those little trunks of glutinous rice that dishonour the name of sushi.)

Some of the junk on offer here has been tarted up to work better as Instagram bait, but this hardly ever improves the gustatory experience. 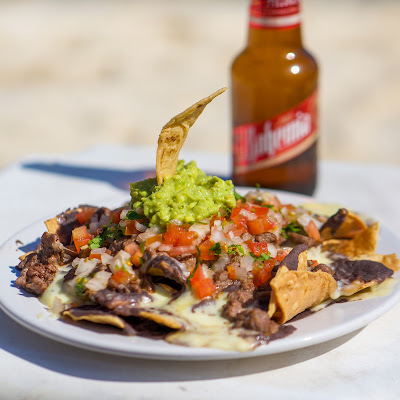 Thus, somewhat inevitably, we are now in a competitive environment in which La Antigua is almost duty bound to de-trash its own hospitality sector if it is to thrive, 'going forward' as marketing types tend to say.

Panama City's casco has at least four excellent rooftop bar-restaurants, two of which I'd have to flag up as genuinely cool, and all serving food and snacks that are at least as interesting as the drinks.

So perhaps the likes of Aqua, along with those boutique hostels which have popped up over the past few years, are harbingers of a more profound transformation in the works. (Even the Bodegona has poshed up a bit over the past couple of years.)

There is absolutely no reason why Antigua could not host a more sophisticated nightlife and gastronomic scene and at a level that is affordable and desirable for younger chapines.

The aforementioned 20-something crowd already enjoy craft beers, unusual wines and cocktails, and have a curiosity towards the snacks they graze which was often lacking in their parents.

Change is a-coming, and it is long overdue.

Posted by Inner Diablog at 5:44 pm