One of those enjoyably implausible plots that one just goes with...at least until the penultimate episode.

Jamie Dornan (near perfect for this material) plays the now almost cliché'd hapless protagonist who wakes up in hospital with 'total amnesia' i.e. having forgotten all the things it is necessary for him to have forgotten for this archetypal thriller format to work, but not say, how to drive or how to operate a mobile phone. 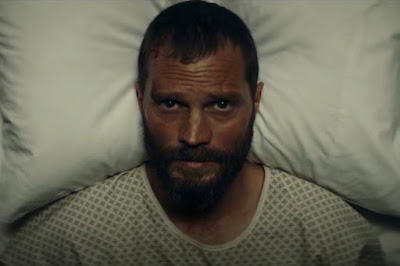 He's come unstuck in a consciously westernised version of the Australian outback, which resembles the Sonoran desert in almost every respect except with regards to grouchy and occasionally obnoxious nature of its cops.

This being Aus, the mobster baddie is called Kostas not Boris, but it might have been just a little bit more topical had he been named Dragan, like the new owner of Southampton FC.

At first one finds oneself pondering what would have happened if Cormac Mccarthy had been born down under and had been generally kind of convivial.

But the darkness gathers, gradually, and in the end feels more than a little unearned (and ultimately unsuccessful), as if characters from Home & Away were seen to be cracking gags weakly as they expired and a whole people and narcotics trafficking backstory is suddenly introduced at the diner.

At this point it feels like the aforementioned author is on stage doing a stand-up routine.

I won't go all in with the spoilers, except to say that there is something of a phoney climax in the fifth episode and the big reveal is served up in parts that feel increasingly small. And the ending itself is one of those that forments The ending of....explained articles in the entertainment press.

Posted by Inner Diablog at 8:05 pm