The first time we sat down to watch this third, (almost) unnecessary and inconclusive sequel to The Matrix, I nodded off. And yet even then I felt I must have been more awake than Keanu appeared to be for much of its running time. 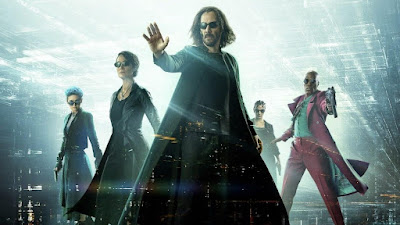 Overall it does appear to be doing its best to be a good Matrix film, in an era when these once influential franchises have a loyal (if ageing) fan-base collectively demanding that certain boxes must be ticked.

There were times however when the thought "What's a dilapidated, semi-comatose John Wick doing here exactly?" flashed across my mind.**

The resurrection here is knowingly incomplete, at least as far as Neo is concerned. Trinity was done as an afterthought, but apparently better.

There's a whiff of faux self-awareness and self-deprecation about all this.

Lambert Wilson then shows up a bit later on, as a sort of Robinson Crusoe version of the Merovingian to ram the message home...

The plot hovers around the outer limits of intelligibility and my levels of caring for whatever it was that was most at stake similarly wavered.

The trouble is that the matrix itself has evolved into a MacGuffin. In the 90s there were a number of memorable movies that entertained us by making us question the very nature of reality, in both philosophical terms and in the drama itself, such as The Matrix and Abre Los Ojos (duplicated rather less memorably as Vanilla Sky).

Resurrections appears to be on a similar course in the first act, and then decides that what it really needs is more kung fu and explosions.

Perhaps someone told them that since the original trilogy concluded, super-hero movies with a lot of commotion, especially towards the end, have become the best way to bring in younger audiences.

There is indeed a loud and sometimes fun final chase with a multitude of bots that are basically surrogate Korean zombies. By this stage existential issues and questions like "where are all the real humans?" had faded from my mind.

And even Neo seemed to be using his powers in a state of exasperated irritation. 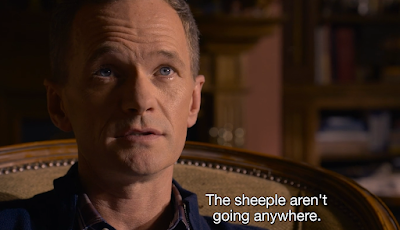 * Triffinty's sim hubby (husbot?) Chad is played by Keanu's former stunt double Chad Stahelski, who would go on to direct him in the John Wick movies. This is, after all, the Meta-Matrix.

** Spoiler alert: we now know the one is really the two.

Posted by Inner Diablog at 8:00 pm