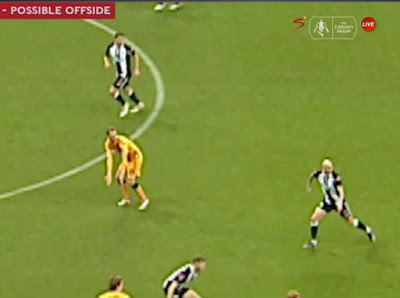 In last weekend's FA Cup third round fixture at St James's Park Cambridge United scored a winning goal that was adjudged by VAR to have been onside.
The correct decision. OK, if we were still running a rules-based system it was probably offside. But Cambridge were 'on the right side of history'.
This fascinating phenomenon has recently been commented upon by legal expert Steven Barret in The Spectator...

I defend the rule of law and our rules-based system because it is the one we have. But it is under heavy and sustained assault. There are clearly people who instead want a values-based system — one where what matters is not following the rules, but holding the right opinion.

As a lapsed historian I can observe here that chaos is sometimes good.

We shall now be watching closely to see what Italian judges are to make of these vandals. Will they, like the Colston Four, be found to have sincerely believed that the owners of the Scala Dei Turchi cliffs wanted them to be covered in ferrous oxide, and so not guilty?

It is quite fortunate however — given the issues immediately to hand — that both Boris Johnson and Novak Djokovic can be said to have broken both the rules and offended our moral consciences.

Judge Kelly might have made a (limited) rules-based ruling on Monday, but the more definitive, values-based one could be coming down the line.

Meanwhile, when I fly to Panama with $10,001 in my cabin baggage, I shall now know to state that my binding declaration form was filled in for me by my 'support team'. 'Oops'.

One can just imagine how Novax handled check-in at Dubai...

"Did you pack all your own bags, sir?"

Posted by Inner Diablog at 7:52 pm