I cannot recall a worse bricks and mortar bookshop than Amazon's on Columbus Circle. Its paltry collection of titles has largely been organised by way of an advert for the discrepant decision-making of algorithms fed by the virtual behaviours of users on the main websites and whilst using their Kindle devices, which nevertheless reveals the potentially insidious nature of any blurring of the physical and the digital. If online services have been developed on the 'free lunch' principle, with payment taken in part through a more or less subtle invasion of privacy, the use of QR codes or even verbal requests for personal connection information like mobile phone numbers now seem to routinely occur at the point of sale in a 'real world' setting when the customer is paying full price for the product or service.

Choosing the blue pill in The Matrix always seemed like a non-choice — to do nothing more than remain within a plodding and possibly synthetic reality — and yet now we see that it involves the conscious espousal of sometimes bafflingly blurred or 'augmented' realities, an inferred collective assent which underpins Zuckerberg's vision for the Metaverse, a space, we are to understand, where the physical is always enhanced not tarnished.

As Slavoj Žižek observes in the masterful review he wrote of The Matrix Resurrections without even seeing the film:

"It will thus be nothing less than metaphysics actualised: a metaphysical space fully subsuming reality which we will be allowed to enter in fragments only insofar as it will be overlaid by digital guidelines manipulating our perception and intervention. And the catch is that we will get a commons which is privately owned, with a private feudal lord overseeing and regulating our interaction." 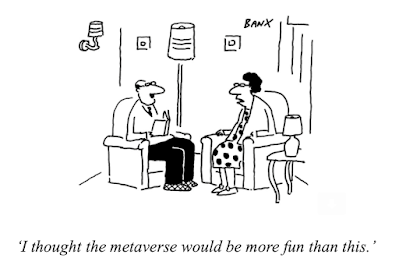