I am going to start this January with some broad and largely unscientific generalisations about the Omicron wave which will probably define it, based on anecdote, personal and indirect observations and my own experience of (possibly) hosting some of these nucleic acid molecules last November.

Firstly, its immune evasive tendencies are broad. It doesn't really care how many shots of the current vaccines you might have had as its spike is significantly different to that used to develop them.

Vaccination may improve one's odds of dodging Omicron, but apparently not enough to properly compensate for its increased transmissibility. 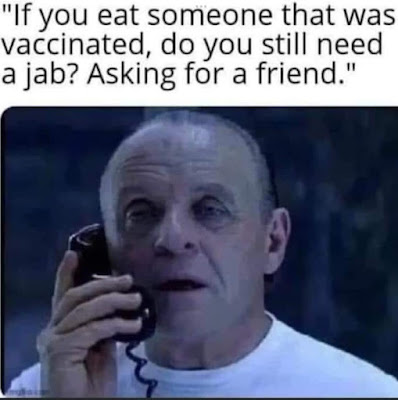 This seems like bad news, but there is a potential silver lining. Omicron outcomes appear to remain relatively mild, perhaps even for the un-vaccinated.

Beyond the most up-to-date South African scientific report discussed here by Dr John Campbell, it's possibly not hard to imagine how this might have come about. Many of the anti-vaxers will already have been infected, but this rampaging variant has adopted a new tactic in borrowing some DNA from a common cold virus and this means that our immune systems are on some levels 'fooled' and yet also familiar enough with the intruder to head off an overwhelming assault — meaning that the apparent cross-reactivity of the T-cells could be a more complex phenomenon still.

Current UK data suggests that the overall risk of hospitalisation is a third of that from Delta, so there will still unfortunately be plenty for whom this will be a potentially life-threatening ordeal.

My cousin has been dealing with long covid for over a year and it sure sounds like something one would wish to avoid.

Yet avoiding Omicron could be the really tricky part.

Until it showed up Hong Kong had largely contained covid within its strict quarantine system, not having logged a case in the wild since October. These defences have now been breached and the implications for the less draconian are obvious: there will be no hiding from Omicron.

This is a very sneaky little bug. Take how those who recover from an infection with this variant end up with super-strong immunity to the predecessor it is hoping to replace — Delta.

This is one reason we should not get over-excited about the apparent peaking of the Omicron wave in South Africa, as we could actually do with Delta being fully supplanted as soon as possible, as it remains far more deadly and there is maybe no absolute guarantee that it won't yet mutate into something nastier than Omicron.

And let's not forget. It's summer down there. 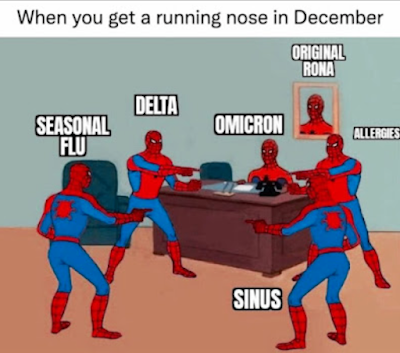 Since the spring of 2020 my wife and I have been looking after and out for ourselves, hardly ever mingling recklessly with strangers or even going out together at the same time except when obliged to by official business.
Then in November last year we had a set of unavoidable tasks to complete relating to our land in Parramos and shared a vehicle with some contractors. Three days later V developed a very sore throat. My own symptoms came on 24 hours later, possibly suggesting we'd been infected at the same time (and saving me from the obvious disrepute of having been the source in our household.)
Each of us developed a creeping fever on day two, which peaked in the late afternoon and then faded fast. Overall it felt like a strangely hesitant case of flu. There was no loss of taste or smell, and although we both developed a niggly dry cough, no significant respiratory issues.
Throats that felt like they were being attacked by daggers yes, and new evidence suggests that Omicron does indeed focus on the upper respiratory tract rather than the lungs.
So, generally fairly mild, but there was a period of a couple of hours for both of us when the fever was peaking when we felt quite seriously unwell,  immobilised in both body and mind, and thus also rather worried.
We fully isolated for over a week after the fever broke and never had a test, our curiosity overruled by the sense that we might be placing others in danger by going out to get one.
LFTs like these are not readily available in Guatemala, and we had not yet been forewarned of the more lenient sepa. 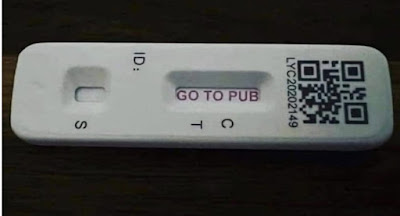 I guess it might have been ordinary flu, yet if so, it would have been the first case of that either of us have had here in a decade and in our experience the fever brought on by that family of viruses usually appears at the outset and lasts considerably longer.
And in my case there was one very odd symptom, which I only later discovered has a strongish association with covid — photophobia. The screens of my laptop and iPad were seemingly transformed into dazzling headlamps to such an extent that I felt unable to use them. I also had a watery left eye and slight blurring of vision in the same.

I've since had my booster, which combined with a previous infection should  have take my present levels of immunity up to the level of the best currently available. But probably still not good enough in the medium term.
And now for something completely anecdotal.
The first recorded case of covid outside of China was chalked up in January 2020. Nevertheless, on returning from a visit to Panama in the late summer of 2019, I had quickly developed the symptoms suggestive of an unprecedentedly nasty respiratory viral infection and duly passed this on to V. We both had serious breathing issues with an associated cognitive fog and fatigue which dragged on for weeks.
It could not have been covid, could it?. It was way too premature given the official WHO timeline. Nobody had yet heard of the novel coronavirus.
Yet I have since occasionally wondered, if only because Panama has had a particular vulnerability during the pandemic, largely because of its canal and the diverse internationals crews which traverse it.
And then early last month I came across another chapin with something similar to report from early September 2019. He claimed he'd once had to stop his car and sit beside the road in a state of near suffocation. The cough had gone on for weeks, along with problems with concentration.
A ponderable imponderable.
Posted by Inner Diablog at 2:00 pm

I’m sure I’ve mentioned in passing, a mystery bug I went down with in 2019. Started with a sore throat and went from there. Wrecked my lungs, took 2 stone of weight off me and left me off work for a month. But September was too early, right? A lot of people who got sick in the lead up to Covid will blame Covid, when they actually had the flu. But i can say with reasonable confidence that I did not have the flu. Three times I had blood sucked out of me to try and identify the virus, twice in hospital and once at the GP. Three times they drew a blank.

I’ve always dismissed the idea. If I had Covid, then where were all the other sick and dead folk? It was just me. I did read something more recently that suggested that a very early variant of Covid might not have been terribly transmissible. Who knows….

I had exactly the same thought. Why just us? There were a few mysterious deaths around here at that time, but clearly nothing like what we would see in Wuhan or Bergamo later on. And you are just one more person who experienced something similar to us. I have also considered the possibility that there was a less transmissable, less deadly precursor around in 2019. The original SARS and MERS were of course less transmissable but MORE deadly. I am fairly certain it was not the flu either. There was actually no fever at all in either of our cases, but it was definitely no cold. V was using a nebulizer for weeks.

And, if there had been a pilot episode, so to speak, it could explain why some populations had a better T cell response to covid-19.

Temperature wise, my case was an oddity. I ran a high temperature for two weeks solid. But just shy of what would be classified as a fever. In day time, I’d not really notice. But I soaked the sheets in sweat every night.

It’s also weird how I failed to contract the disease at any point in 2020\1. I shared poorly ventilated office space with Covidians numerous times, including with a blatantly symptomatic colleague who went on to pass away. But not before he passed on a parting gift to everyone but me…

I read your email regards Omicron. There’s not a lot I could disagree with there.