Eric here has been a good source of expert information and opinion throughout the pandemic, yet he occasionally inclines towards overt scaremongering.

i.e. "Reminder that Omicron is not intrinsically much milder at all". 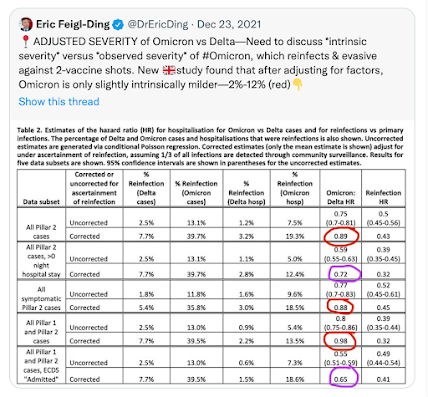 Like many American academic voices it seems his propagation of fact is being consistently (over-)informed by the political polarisation around him.

I recently read the first chapter of a book on European medieval history and was astonished by the repeated mentions of 'whiteness' and 'white supremacist' therein. I think it can be seriously unhealthy to make the way history might have been been used in contemporary discourse a fundamental part of the fabric of the actual story.

Any book in English is going to be read by people all over the planet and not all of them are already entrenched in the same mindset. The effect is to export America's cultural warfare into the English-speaking world's intellectual ecosystem.

Anyway, even as a non-scientist, I can spot the obvious flaws in the assertion that Omicron might not be mild once we 'adjust' for vaccination and previous infection.

Firstly, and obviously, in spite of fewer vaccinations (and possibly fewer recuperating patients) in South Africa, it remained mild there.

And how would one account for the fact that only one Omicron-covid patient in Scotland has so far been admitted into the ICU without reference to the variant's relative mildness?

The UK would anyway seem to be the last place where this kind of 'adjustment' to the data could be done in a balanced manner. Over 90% of the population is now said to possess covid-specific antibodies, so the 'control' group is bound to be small and possibly unrepresentative.

Given that one cannot infect one's test subjects on purpose, scientists in the UK would be relying on unvaccinated people randomly reporting severe symptoms or turning up at hospital. By then it would presumably be difficult to determine beyond doubt that there had been no previous infection.

One group that is apparently experiencing Omicron as a more severe illness is the under-14s. This is also a group that is comparatively under-vaccinated, yet many might have been infected in 2020 with the earlier variants asymptomatically — and so perhaps never previously tested. 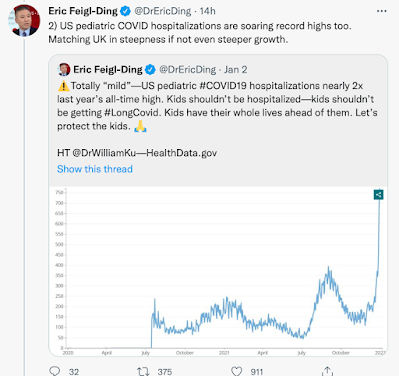 The comparative danger to children is probably real, but ought not to be used to make more generalised observations about the current wave.

The issue here is more to do with the failure to expand the vaccination programme to the school-age population in parts of the US.