My academic background as a historian has left me with a handy skillset when it comes to assessing mountains of complex evidence.

Some time into the Depp-Heard trial in Fairfax I reached the conclusion that the balance of the evidence taking form suggested that Amber could not win, and while Depp might, his case would ultimately come down to the jury's gut feel.

In the end I also rather accurately predicted how this would play out financially. I suspected the jury would give Depp back what Amber had pocketed and 'pledged' with a limited punitive premium on top, well short of the absurd $50m demanded. With the cap on punitive damage and Heard's own token win, Depp stands to receive $8m.

The marriage was a shit show and in effect, by awarding Heard a nominal $2m for the ‘ambush/hoax’ claim in the Daily Mail, the jury have pronounced that neither actor really had any business to jump up on a soap box and that Depp's supporters significantly over-reached before American justice was more formally invoked.

Now, I am assuming that there are many individuals possessing what I would describe as critical faculties in the serious mainstream media, yet their apparent collective unwillingness to join the unwashed online masses in recognising the lay of the land here has been rather depressing. The prevailing cultural orthodoxy has been silencing basic common sense in the now familiar manner.

Right to the end, many powerful voices were painting the supporters of Depp as an online mob of pitiless, bedroom-bound otaku.

On Monday I read in British Vogue a statement I regard as un-self-consciously heinous: "It's time to believe all women", as if (roughly) half the population are duly excused from having to back up any damaging allegations.

I have relevant personal familiarity with this situation, having been the victim in the past of a deluded female stranger here in Guatemala who has lied demonstrably and repeatedly to relevant authorities in a malignant and sloppy fashion, presumably in order to injure me.

So I would suggest that this sort of rigid ideological nonsense is something all would-be liberal societies should reject out of hand. All that matters is the truth.

That said, I was not that much of a Johnny fanboy before the trial and am possibly even less so now. There was however some palpable dignity in his determination to clear his name no matter how many indignities he had to face along the way. (And the exposure of his own occasionally undignified references to his ex-spouse, at least with third parties.)

I believe Amber might have thwarted him by limiting her own ambitions in the trial. It could not have been hard for her to paint her own experience of this toxic relationship as subjectively abusive — and it probably was — but she chose instead to augment her tale in a manner that upped the stakes considerably — as well as the risks — and this served to emphasise the fundamental contradictions and inconsistencies in her testimony, as well as the instances where she was found to have strayed from the truth, beyond all reasonable doubt.

Any sense that she could have been a victim was lost in the revelation of her apparently crass efforts to establish herself as such in the culture, seemingly as part of a knowing career strategy.

One thing I noticed about Amber Heard quite early on in the process — aside from the obvious limitations to her professional ability — is that she appears to have a massive chip on her shoulder. And I have come across these near psychopathic levels of insecurity elsewhere.

It's really not at all hard to see how deeply she resents the stylish and intelligent women in Depp's past: Penelope, Kate, Vanessa and so on. None of whom, it needs to be said, grew up as junior members of the European elite, but all of whom matured into icons of taste and grace that Heard could never hope to compete with.

Malicious dishonesty and nastiness often thrive beneath prodigious levels of presumption — the kind propped up by semi-conscious shortcomings, and which tend to wobble perniciously when projected unconvincingly onto others. There was a painful inevitability about the manner with which Amber set about trying to undermine Johnny in relation to his contract with Dior.

The pretentious are driven to demean the perceived pretensions of those around them, their criticisms often lazily tweaked self-criticisms.

Heard's antipathetic aura was not merely an invention of the trolls. She certainly wasn't helped by her legal team, but they were up against it from the start with a client using truth and falsehood synonymously.

And in the need to distract the jury from her attempts to disguise the signs of hatefulness beneath a counterfeit costume of convulsion. 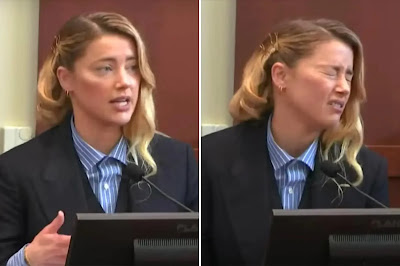 #metoo: I also recently stepped on a bee...
(Objection...relevance.)

She will now almost certainly face the full force of our culture’s wrath. And much of it will be unseemly.

Appropriately enough, we were drinking Stella as the verdicts came in.

It has to be said that the judge was a true star throughout: "You have to answer questions...yes, sir."

Posted by Inner Diablog at 9:26 pm