The annexation of Crimea...

"They also declared their formal recognition of the Russian annexation of the Crimea. But in reality they never fully accepted its loss and waited for revenge."

The 'they' in this passage in The Crimean War by Orlando Figes, were the Ottoman Turks, following Russia's previous annexation of the Crimea in 1783, a tale that makes for some fairly depressing reading today.

As now, the Russians were not content to merely pinch the peninsula, but were determined to colonise the whole of the northern coast of the Black Sea.

Catherine the Great put her chief sidekick Potemkin (he of village and battleship fame) in charge of this project which Figes says the Russians understood as a necessary precursor to recapturing Constantinople and perhaps thereafter bringing the Holy Land into their sacred, restored 'Roman' empire of Orthodox Christian peoples. 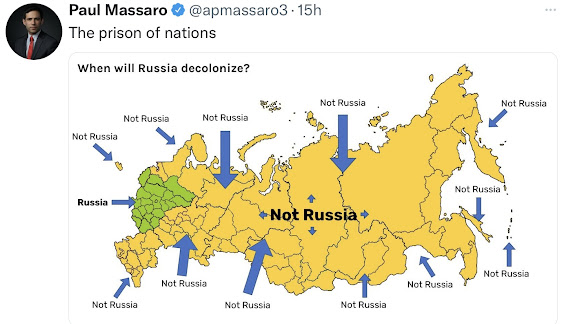 Potemkin got busy in 'New Russia'...less Not Russia than Novorossiia.

New cities were established there – Ekaterinoslav, Kherson, Nikolaev and Odessa – many of them built in the French and Italian rococo style...30,000 Christians were moved to Taganrog, Mariupol and other towns on the Black Sea coast, where most of them became homeless.

Meanwhile in the Crimea a certain amount of what we now tend to characterise as 'ethnic cleansing' was occurring...

Russian policy towards the Tatar peasants was more brutal. Serfdom was unknown in the Crimea, unlike most of Russia. The freedom of the Tatar peasants was recognized by the new imperial government, which made them into state peasants (a separate legal category from the serfs). But the continued allegiance of the Tatars to the Ottoman caliph, to whom they appealed in their Friday prayers, was a constant provocation to the Russians.*

Figes pinpoints why the Crimea was (and perhaps continues to be) such a flashpoint, seemingly always in contention in both modern and pre-modern history...

The Crimea has a long and complex religious history. For the Russians, it was a sacred place. According to their chronicles, it was in Khersonesos, the ancient Greek colonial city on the south-western coast of the Crimea, just outside modern Sevastopol, that Vladimir, the Grand Prince of Kiev, was baptized in 988, thereby bringing Christianity to Kievan Rus’. But it was also home to Scythians, Romans, Greeks, Goths, Genoese, Jews, Armenians, Mongols and Tatars. Located on a deep historical fault-line separating Christendom from the Muslim world of the Ottomans and the Turkic-speaking tribes, the Crimea was continuously in contention, the site of many wars.

This somewhat forgotten conflict which began in 1853 — the first total war — represented a watershed moment in the nineteenth century, when the leading European powers decided that they were more afraid of Russian despotism and loopy imperial ambition across Eurasia than they were of the old Islamic civilisational foe.

At Sevastopol 150m gunshots and 5m bombs and shells were exchanged by the two sides. The Black Sea port has a trio of military cemeteries in which an estimated 250,000 Russian soldiers, sailors and civilians are buried. 127,000 died in the defence of that city alone.

This is a part of the world where the Russians are used to bleeding...

*And next to humiliating the Russians, provoking them is definitely something to be avoided, or so we are told.

The Russian Empire is just that, its current escapades in its western border could well lose its eastern area to its 'friends' in that region. Empires are like that, a little slippery to hold on to if one gets distracted in another region of the empire.