Nobody who speaks the truth has anything to fear from this judgment. 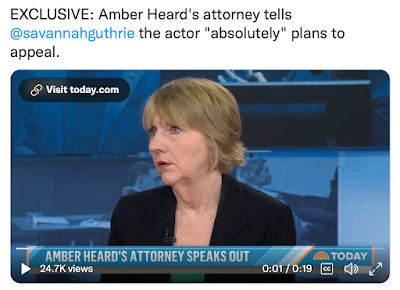 Victims of abuse of either gender do however need to fear Heard's continued determination to represent them all, in particular because her comparatively unique position as a (compromised) public figure tends to distort the issues.

Depp has said that he too was a victim of domestic abuse, yet appears to have the common sense to understand how his celebrity status requires him to hestitate before stepping up on that culturally-elevated pedestal.

The UK judgment is of course irrelevant. Depp made the mistake of trying to suppress the free expression of a British newspaper and lost, deservedly so.

The UK's libel laws are very different to the various defamation statutes in the States, so the cases cannot really be compared and anyway, the UK court did not really get to grips with the extent of all the plot holes in the Amber story.

The interview here contains a regurgitation of the claim that Heard never mentioned Depp in the op-ed, when we all watched her admitting to having specifically written it about him on the witness stand.

Does anyone think she would have accepted "I can't pay, soz" from Johnny?

This is very partial reporting for there are many genuine survivors of abuse who were 'sickened' by Heard's grandstanding.

And I could also testify that there are numerous survivors of malicious abuse of the justice system who will be taking heart today.

If you fake a break-in at your house for insurance purposes and get found out, this should have no bearing whatsoever on any one else's experience of burglary.

It's way past the time for us all to recognise collectively that victimhood is not some sort of collective.

Posted by Inner Diablog at 8:17 pm