Below, some key soundbites from the audio featuring Amber Heard, a nurse and the fabulously-named Dr Kipper shortly after she had allegedly launched a bottle of vodka at Johnny, thereby amputating the top part of one of his fingers.
In the moment, she was sorry.  She didn't mean it. But on the witness stand, less so. She said she didn't do it. The injury had zilch to do with her.
Yet the jury had access to the full audio during their deliberations.
One just cannot do this sort of thing in a court of law and hope to get away with it. It's perjury, an actual crime, in this instance to add to the earlier crime of assault causing GBH.
This is why the American legal system needs to throw a blanket right away over Heard's victim cosplay. From her current position she can do serious harm to victims' rights across the developed world and there are powerful voices in the media that right now seem willing to facilitate this.
It's possible — perhaps even likely — that there was mutual abuse in this relationship, but the trial was primarily about Heard's later attempts to establish herself as a figurehead using a number of pretty underhand techniques.
There are many women who are far less able to escape from a pernicious domestic (or near-domestic) situation* than Amber Heard was, and it is time that she stops trying to be their Saint Joan.
Perjury charges might help her focus right now. 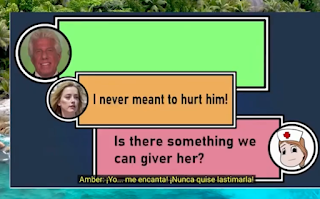 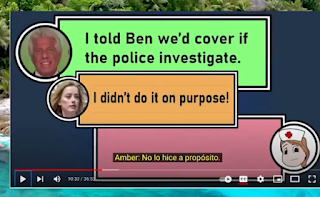 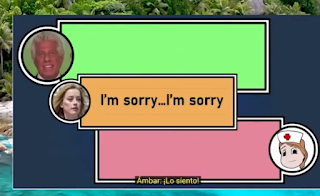 * Take one of our near-neighbours to the west, a woman we have both known for over 30 years, whose consistently alcoholic, violent and abusive husband has been the subject of several police visitations, yet because their combined domestic situation is based on looking after someone else's home — plus the fact that they have several dependents — it is hard to see how she could possibly break away.
Meanwhile, her husband openly and shamelessly conducts an affair with the cleaner employed by another neighbour — an Aussie of some repute on these pages — delivering her in his red picop on the days of her employment to the house right next door, and occasionally collaborating with his lover's contributions to the aggressions we have faced from within that seriously twisted household.
And yet more shamefully he has repeatedly used the home of her employers as a kind of private motel, when convenient.
She apparently creates phoney power cuts to disguise these trysts by turning off the electricity at the fuse box in order to disable the security cams, but is serially kippered when they leave after she turns it back on and the doorbell rings.

Posted by Inner Diablog at 7:05 pm