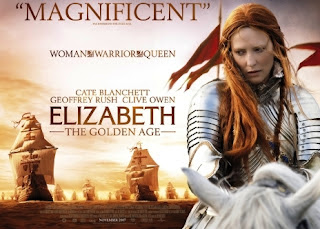 Mark Kermode had sold this to me as ridiculous...but in a good way. This sounded like something that would be worth spending money to see, but unfortunately every time the funny stuff gets going − snarling Spaniards prancing around like a bunch of repressed Opus Dei freaks, Sir Walter swingin' in the riggin' − the action switches back to a rather humdrum but good natured domestic drama.

And unfortunately, there's also rather a lot of the bad kind of ridiculousness, such as the fact that the Elizabethan court appears to have been located in the nineteenth century neo-Gothic annexes of St John's College Cambridge and then of course there's that speech, on that horse, in that armour. If any of the pike-carriers that the virgin queen addresses had actually participated in the battle it would perhaps have been more forgiveable. And what was wrong with Elizabeth's actual reported speech at Tilbury?

For this part of the movie I'm sure that Shekhar Kapur could cite his influences as Henry V, Pirates of the Caribbean, The Return of the King and maybe even John Boorman's Excalibur, a film that epitomises for me the premium variety of ridiculousness (see below).

I almost went to see this film that evening when I was wandering around Santa Monica suffering from sleep deprivation. Instead I went to see The Kingdom, but I now suspect that the effect would have been much the same: zzzz for the first three quarters followed by a degree of attention to the explosive climax. So, entertaining enough, but I liked it best when it was closest to being a spoof. In this instance, I really was expecting more of the Spanish Inquisition.

Incidentally, I have often heard the guides on the Thames tour boats asserting that the infamous cloak-laying incident involving Raleigh, the Queen and a puddle by the stone steps on the Bermondsey bank of the river, directly in front of my apartment. I'm pretty sure it never happened though, and at the time of the Armada Raleigh was landlubbing it as Vice Admiral of the not entirely seaworthy county of Devon. It was of course Drake, as anyone who has read One Hundred Years of Solitude will know, that the Spanish regarded as the pirata de mierda.

However it was an ill-conceived attack on the Spanish outpost of San Tome on the Orinoco that would lead to the Spanish ambassador (no doubt just like the baboso in this movie) to petition James I to reinstate a death penalty imposed in Raleigh just after Elizabeth's death. After his execution in 1618 Sir Walter's wife Bess carried his embalmed head around with her in her handbag until she could no longer abide the smell.