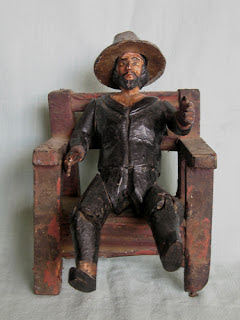 Tonight is bonfire night in London aka Guy Fawkes night, and boy did I get grief for that every year at prep school.

Is it ethical? asks Spiked with tongue in cheek.

London used to sound like Mogadishu for around two weeks either side of this important date, but the authorities have cracked down on the sale of fireworks over the past couple of years. The best displays are public, though on Sunday I missed out on Surfer's dad's rocket attack on the neighbouring township of Acton, which he likened to the start of Operation Iraqi Freedom.

St Andrew's, the prep school that borders Herons Farm, had its annual display on Friday night, and as ever it was a traumatic experience for all the horses, my father reported.

I attended the one in Battersea Park on Saturday by positioning myself on the Chelsea Embankment opposite the Buddha and just across from my father's notorious bachelor pad on Cheyne Row. (The clip below mostly comprises of footage I took of the finale.)

El Curando is a great little site for picking up authentic Chapin clobber, such as these wooden effigies of highland saint and sinner Maximón, the closest thing Guatemala has to our Guido, though instead of being roasted every year he is treated to fine cigars and wicked liquor. (They also burn the Devil every December 7.)

We have a friend in La Antigua whose principal collectible obsessions are ducks (feathered and felt) and authentic Maximóns, and it is the latter that makes him bonfire material himself, according to some of the more righteous members of our neighbourhood.

Right, I'm off to sit on my balcony and watch some more luces going up across the whole southern panorama of the capital. It's starting to sound like Somalia out there already. The only snag is that it is considerably colder out tonight than it was on Saturday.

Posted by Inner Diablog at 7:30 pm

Guy, I posted a few photos of the Burning of the Devil celebrations last year... check it out, if you are nice to me and lend my your Slow Man book to read, I promise I will send you a Piñata #7 Devil. ;-)