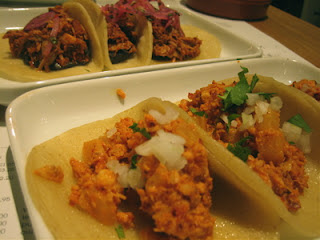 Talking of Tex-Mex output, the area within lunchtime walking distance of my office has two new Mexican eateries.

First up Wahaca in Chandos Place, which is a phonetic spelling of Oaxaca. They probably didn't do this just because we Londoners are the kind of morons that wouldn't be able to pronounce it properly (rat-a-too-ee), it also kind of makes sense from a Googling perspective too.

"Quite good," our Chinese intern Evi politely summarised, and it may not have even made that grade had someone not ordered what is clearly Wahaca's signature dish, the Sonora salad, (see the menu here) which arrives in a bowl with the oleaginous substance of a mutant Kettle chip.

I was also pleased to find some jalapeño seeds in the bar matchboxes. This is a clever response to smoke-free England. They are now in a little pot on my balcony and I will report back on their progress.

The rest of the formula is being violently tugged between an earnest desire to be more authentic and the inauthenticity of international cool. When did 'Mexican market eating' become a lure to anyone that has actually eaten in a Mexican market? And when did you last hear electro-tango tracks played in your local cantina? OK, some of the ingredients show a degree of extra effort, but I'm with AA Gill when he warns his readers off any restaurant where the opening gambit of the serving staff is "Have you been here before?"

Our own notably pushy waiter made a point of informing us that we wouldn't find any Tex-Mex nonsense like fajitas at Wahaca. Oh no. Maybe someone can explain to me why burritos are kosher and fajitas aren't, but I've had some of the best sizzling chicken in the Yucatán, which is quite a way south of El Paso.

What depressed me most about Wahaca was perhaps the realisation that V and I could do better. The idea has mucho mileage, especially when you read this article by la patrona, but they need to start by taking stock of the fact that you can't make a small portion of totopos look yummier by serving them in what looks like a mug without a handle.

In blatantly appealing to the donkey, sombreo and slammer crowd Loco Latino in Romilly Street has opted for the south of the border authenticity of the Mayan Riviera. The comedor ambience would be familiar to anyone that has been to the joint called Los Tacos on the Calzada in La Antigua, run by some of V's cousins: red checked tablecloths, red paper napkins and a bottle of hot sauce on the table. Loco Latino calls itself a bar, but the one inside the restaurant (there's a 'cantina' upstairs which I didn't visit) is the kind you find in East End Balti houses: lots of mirrored glass and bottles that generally don't move off the shelves.

The quesadillas there are a violation of the trades descriptions act, because there is but one, and it arrives bubbling in tomato and oil and looking much like (oval clay bowl notwithstanding) a microwaved Smart Price canneloni. The fajitas sizzled and were very tasty. The tortillas came in a little plastic pot and were a passable compromise between the flour tortillas you can get at your supermarket and the less flimsy corn variety that are the staple of Guatemalan cuisine.

Verdict: This is how to serve quesadillas (i.e. 3 not 2, with something alongside, all on a plate that is just a bit bigger than the dish itself). I still don't agree with AA that there's no such thing as good Mexican nosh. But finding it in London remains a chore. The best of the bad remains La Perla, and if they decide to put half as much effort into composition as Wahaca does, I'll be going back more regularly.
Posted by Inner Diablog at 11:15 pm