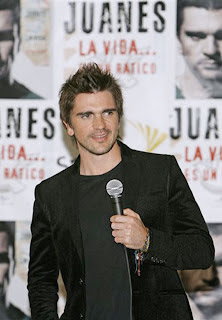 I suppose Juanes must be very marginally the second most famous Colombian singer-songwriter in the world.

His new album, titled as this post, has been produced by Gustavo Santaolalla, who I saw in concert a couple of weeks ago at the Roundhouse with his electrotango combo. It's growing on me quickly, especially the track called Tres.

As with Guatemala's own three-time Grammy winner Ricardo Arjona, it's the mix of rock with local traditional rhythms and heartfelt,well-crafted lyrics that makes this music so appealing. Here's a clip I found of YouTube of Juanes singing the title track from this album: