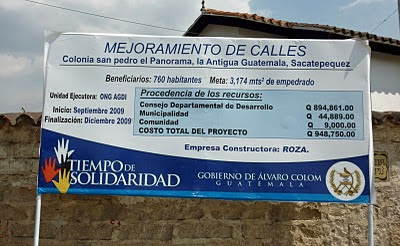 We need wonder no more who's been paying for the multifarious improvements around our neck of the woods over the past twelve months or so.

Just under 1% was stumped up by our vecinos (760), yet not a great deal more came from the sale of marbetes around Antigua (an activity which is reaching fever pitch as Easter draws closer).

Instead, the political ties which exist here between local and central government would appear to have been crucial.

So we were wrong to suppose that our local seignueur, the other Don Álvaro, might have put his hand in his pocket in order to assist the prospects of his son, apparently one of the key investors behind the latest substantial urbanisation project in the area.

Posted by Inner Diablog at 6:23 pm