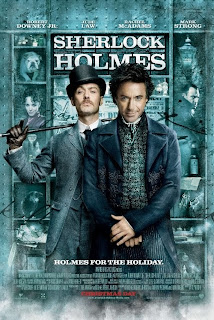 Could this be step one in the resucitation of Guy Ritchie's post-Revolver/post-Madonna career? Apparently, as well as the as yet unnamed sequel to Sherlock Holmes, he's now signed on to make a movie based on Mallory's Morte D'Arthur....Excalibur.

Now, when Jamie Oliver was lately traversing the United States looking for its signature dishes, we both found it a little galling that he couldn't just leave a traditional, tried-and-tested recipe alone, so you'd probably imagine I'll be siding with the Arthur Conan Doyalists in dismissing this attempt to fit a much-loved character from gentler times into the action hero mould. Well, you'd be wrong.

Ritchie only took this job after insisting the famous cap and 'elementary my dear Watson" would have to go. He's come up with a fun revisionist Holmes caper which succeeds in spite of itself: specifically in spite of Robert Downey's bizarre Victorian diction — based apparently on Sir Anthony Hopkins and Patrick McGoohan, but sounding more like the Prince of Wales...or at least the Prince of Wales as done by Hugh Laurie in Blackadder— in spite of the casting of Jude Law as Watson (which resulted in Sienna Miller pulling out), in spite of its loopy plot (in part an hommage to Alan Moore's From Hell, surely?)...and in spite of the fact that it's all been helmed by Ritchie himself.

Canadian actress Rachel McAdams is one of the movie's most winning elements. According to the trivia section of the IMDB she tried to escape wearing a tight corset every morning, by pushing her stomach out or eating a big breakfast of oatmeal before being laced up by costumiers...but they were soon onto her.

I suppose the movie will also come as a special pleasure for Londoners with its slightly ropey CGI representations of the late Victorian capital, including a half-built Tower Bridge, scene of the final showdown between Sherlock Holmes and the evil Lord Blackwood, played by Mark Strong. Ritchie wasn't above blending in some street scenes from Liverpool and Manchester and referencing a pub with the same name as the one he owns in Mayfair!

Other than all that, we can only recommend that he continues to make films using other people's scripts and Hans Zimmer's soundtracks.