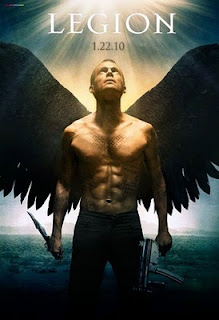 God is 'fed up with all the bullshit*' and decides that it's time for another extinction event. That's what He wants, but what does He need?

Archangel Michael decides to risk his celestial paycheck on this tricky theological distinction, and in spite of being ordered to Earth to make sure one particular human baby doesn't make it, he changes sides, slices off his wings, loads up with automatic rifles and heads out to the Mojave desert, where a pregnant waitress and a few good folk are holed up in a diner resisting the assaults of a diabolic host...except that these neck-munching, ceiling crawling, black-eyed fiends aren't demons at all, but the Holy Trinity's angelic "only obeyink orderz" army, led by the more unquestioning Archangel Gabriel.

By now I have no doubt that you will either have been completely sold or turned off by this B-movie caper from Scott Stewart. The film knowingly helps itself to tropes from the Terminator and Tremors franchises plus countless zombie and apocalypse movies, which results in a mix of deadening cliché and entertaining pastiche.

* The Vatican's response to the Irish clergy's kiddlyfiddling shame was probably the last straw.

Posted by Inner Diablog at 5:17 pm