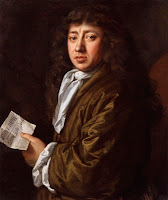 The year kicks off for Sam with an atmosphere of desperate political uncertainty and re-heated turkey. (Except that the year didn't begin legally in England until March 25th — a procedure which was not to be adjusted until 1752 — which means for adminstrative purposes at least, it's still 1659.)

"My own private condition very handsome, and esteemed rich, but indeed very poor, besides my goods of my house [in Axe Yard], and my office, which at present is somewhat uncertain," he writes on January 1st.

Perhaps a sense of the potential significance of his own personal uncertainty within the universal uncertainty across the land, prompted Sam to commence his secret shorthand diary that wintry January.

He is what we'd call a white collar worker, but tied by lines of patronage to an older social system, which was very much in flux at that time, there being neither a King nor a Parliament, and all the big players in this post-Cromwellian instant jostling noisily for position.

Whenever he has a spare moment (seemingly quite often) Sam heads across to Westminster Hall or checks out the posts on Fleet Street, where the twitterers of the day serve up the latest rumours about the movements of Monk, Fairfax, Lambert et al. Mass personal publishing is not entirely a novelty of the Internet age.

"Great talk that many places have declared for a free Parliament," he wrote on January 2nd, an indication that many were yet willing to persevere with England's brief experiment in republican government. (Two days later Sam is reporting how MPs have locked themselves away in a state of fasting and prayer.)

Sam works as a clerk for George Downing, one of the four tellers of the Receipt of the Exchequer, and his principal responsibility in that office is to deliver pay to the soldiers of the standing army which may yet play a crucial role.

The rest of the time he wanders around town rather like I used to in Cambridge, looking for acquaintances to interact with. Once tacked onto suitable company, Sam likes to participate in the pastimes of the era, such as cribbage and playing the viol, as well as the consumption of turkey-pie, 'brave cake' and sack (vino).

Breakfast for a Londoner in 1659/60 consisted of a swift pint at a local tavern, it being ill-advisable to drink the local water and just a couple of years before the big coffee shop craze gets going.

Although at this moment Sam apparently considers himself to be in good health, he informs us on the 4th of January that "It snowed hard all this morning, and was very cold, and my nose was much swelled with cold." The next day he consults with a certain Mr Page about his nasal discomfort, who tells him it's just a case of the common sniffles. And so they move on to discuss current affairs.

We know that, especially for a member of the Pepys family, Sam will live to a comparatively ripe old age, but a close attention to every niggling ache and pain will be an abiding characteristic of his night-time notes, until the end of the decade when an unspecified eye problem will put him out of the diary-writing business altogether.

Posted by Inner Diablog at 3:54 pm

I didn't know they'd made a movie out of Pepys! Cool. I have the collection of his diaries (that's the kind of nerd I am) which I haven't yet read all, but hope one day to do so.

Not a movie review...

I'm trying for the second time to read the unabridged diary from 1660-69. Will probably take me more than a decade!