Suffer little children to come unto me 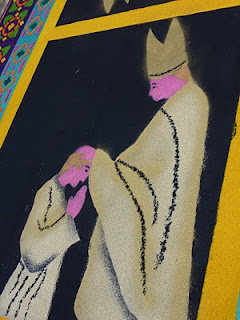 Pope Benedict XVI has been getting the full Bill Clinton treatment this week, following the Vatican's failure to ring-fence (as my former colleagues in the PR industry like to say) the sordid revelations emanating from the Irish branch of the universal church.

Actually, one could say that the former Archbishop Ratzinger's level of personal guilt here amounts to even less of a clear-cut sackable offence than Ronald's Reagan's definitive deniability in the Iran-Contra scandal. God knows I never read every memo I was CC'd in on!

But this hasn't stopped regular cassock-baiter Christopher Hitchens from going on the Bill Maher show in order to call for the Pontiff's arrest under US law. (26 States currently include members of the clergy among those professionals specifically mandated by law to report known or suspected instances of child abuse or neglect.)

Perhaps the only man in the whole world who would dare to indict the Pope, has himself been suffering some serious reputation damage this week, with a real possibility of career-threatening legal consequences.

Spain's super-juez Baltasar Garzón has been accused of wantonly acting outside his jurisdiction. When I heard this my first thought was, why has it taken the Spanish authorities so long to react to something that us anglophones cottoned onto the moment Garzón started issuing arrest warrants for the likes of Osama Bin Laden and a large part of Latin America's class of retired dictators.? (Starting most notoriously of course, with Pinochet.)

The irony here is that the judge has been pulled over now for abusing his authority in the one area you'd think could actually be said to fall within his remit: a probe into atrocities carried out during Spain's own civil war.

In other news, the government of El Salvador officially apologised to the rest of the world this week for murdering their own Archbishop back in 1980, and I spotted a big poster for Gerardi, La Película on the way into the capital. Does any one know which version of the events surrounding the bishop's bludgeoning (if any) this new film alludes to? (i.e. Goldman's or  Vargas Llosa's.)