This afternoon, seeking refuge from the calor insoportable, I decided to stand on the front balcony for a while in the hope of catching a passing zephyr.

Suddenly a strange whirring siren (rather like the politer sort of car alarm) announced the arrival at the nearby intersection of one of those deadly serious motorcades we see round here from time to time. First to cross were two cops on low Easy Rider-style bikes dressed, I fancied, a bit like the stars of that 70s show CHIPs.

The next section consisted of four enormous black, blindados Suburban-style SUVs. The process is always the same: the first and third cross the intersection slowly, checking for any approaching threats. Their back windows are open and yet completely blocked by armed and armoured men facing out. Once they have satisfied themselves of the integrity of this particular T-junction, they move on, closely followed by the second and fourth vehicles in the line — the ones carrying 'the packages' — which then zip across as fast as they can.

After these come an assortment of back-up vehicles which varies from motorcade to motorcade. This time there was a plain white pick-up and a PNC van. On one previous occasion there was a light truck in the train, fitted with a huge pedestal-mounted machine gun, a set-up reminiscent of the 'technicals' favoured by Saddam's Fedayeen in the immediate aftermath of the 2003 invasion.

Today the men staring out of the last goonmobile quickly made me on my balcony, so I was glad not to be holding anything that might even vaguely have resembled an RPG.

So, who could it have been? Colom is in Moscow. Perhaps, we later speculated, it was J-Lo and Marc Anthony popping in for a spot of pre-concert afternoon tea with Ex-Prez?

Ever since the time he was out riding with his wife and his ever-keen presidential guard (the dreaded EMP) accidentally executed a milk delivery man, Ex-Prez has appeared to prefer more low key security. Indeed, we often see him zooming around the neighbourhood at the helm of his Mule with only one bodyguard (hanging on for dear life).

Once he even came visiting alone. Well, in fact he tapped on the door belonging to the house of V's below-radar brother R, and duly asked if she was around. R must have thought 'WTF??'. Along with his motorcycle crash helmet, Ex-Prez was wearing a thick kevlar vest with an antenna sticking out the chest pocket. V also relates that he had a big button on his left cuff, as if all he had to do was press it and the SWAT team would start descending on ropes from above.

Anyway, the substantial PNC presence here in Panorama means that one has had to get used to men with AK-47s on their backs wandering slowly up the road ruminatively munching their Tortrix.

None of this really fazes V. Back in the 80s and early 90s she had her run ins with the much dastardlier (and now thankfully defunct) Guardianes de la Hacienda. She remains thoroughly freaked out however by the occasion that she came across a nuclear submarine passing our Thameside balcony around 2am one morning.

Substantial vessels of one sort or another are regular visitors to the Pool of London and the naval variety, passing sigilosamente under cover of darkness, sending a fleeting wraithlike shadow across our bedroom window, tended to steam up-river at speed — completely blacked out — with only their red and green navigation lights illuminated. No doubt a precaution against canon fire from disgruntled members of the East End Bangladeshi community. 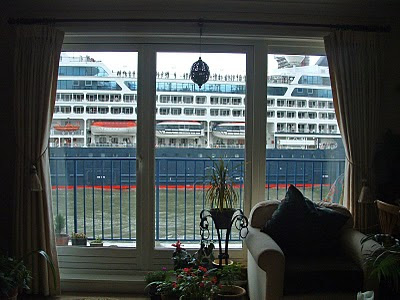