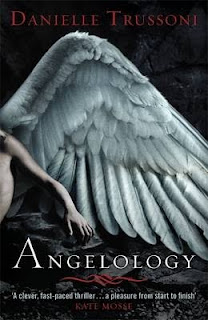 There are approximately 260 references to angels in the Bible, but only 6 of them mention wings.

This, and other fascinating factlets, cropped up on a recent radio interview given by Professor Peter Marshall of Warwick University, co-author of Angels In The Early Modern World.

Marshall was on mini-panel discussing the durability of these messengers of the divine, who seem set for a pop-culture resurgence in twenty ten.

Now, you might have expected them to have been first against the wall when the Reformation came, but it appears that there are just so many textual accounts of their activities in the scriptures that they proved rather difficult to expunge from the theological record.

Part of the explanation for this resilience may be the fact that angels pre-date the Judaeo-Christian tradition, and as representatives of a more ancient lineage of near-eastern superstition, which has been co-opted yet not contained by the church hierarchies, they appear to have genuine populist appeal.

In early Christian times the standard iconography presented angels as bearded males. But then came the Middle Ages and a whole load of hang-ups about sex. Pope Gregory VII and his fellow reformers insisted on a celibate lay clergy in order to ensure that church property held firm against the nascent nation state's inheritance laws; and so the de-carnalisation of angels ensued as a natural consequence of spurious retro-fitted ideas about purity.

I tend to equate angels with Tolkein's elves. Immortal yet somehow, not bored, they are a far more easy-to-comprehend embodiment of humanity's better self than God could ever be.

As Jeremy Rifkin puts it in The Empathic Civilisation, there's paradoxically no place for the more exalted human emotional responses such as empathy in Heaven or the Marxist utopia, because in such perfect environments there can be no suffering — which means there's nothing to get all empathic about. That an utterly perfect, omniscient being could take a real interest in the trivia of our miniscule existences is something only the vainest of believers can hold to be certain. Angels however, are just like us, without all those sinful tendencies.

Indeed, medieval thinkers started to relate angels to the formally chaste condition of human souls reawakening on the Day of Judgement, and pictorially angels duly shed their whiskers and assumed a decidedly androgynous look in medieval art.

An abiding characteristic of unregulated popular belief in the Middle Ages was the notion that animals and children were somehow closer to the supernatural than everyone else and could perceive beings on the edge of crossing over, so to speak. It's therefore hardly surprising that angels have developed a special bond with the immature and that one of the most attested loci for the summoning one of God's messengers has been the fingernail of a child. One doesn't have to be a qualified psychologist to detect a deep-seated fear of adulthood in western culture (And is it all that surprising given what priests — if not angels — have been getting up to with the children that they've taken a special interest in?)

Angeology, the hot new thriller by Danielle Trussoni (pictured above) — a recent addition to my Kindle 'pile' — is clearly pitched at a readership somewhere between those of Dan Brown and Umberto Eco. I'll probably get round to finishing it during my May odyssey.

The title is suggestive of another contributing factor to the unlikely durability of angels since science started to suppress superstition: they lend themselves to the empiricist's soft underbelly: pseudoscientific, occultic, taxonomic obessesiveness.

Anyway, so long bloodsuckers and hidehi super-seraphs. If Legion is anything to go by, this year's crop come with added testosterone. (No beards so far though.)
Posted by Inner Diablog at 4:28 pm