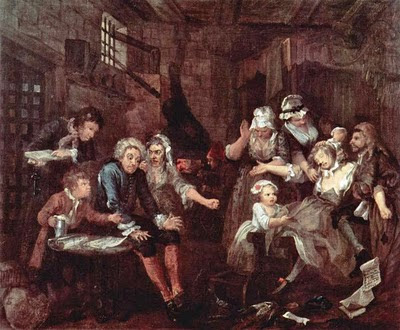 By now Tom has been incarcerated in the notorious Fleet prison for debtors and still leaking money, as both his jailer and the beer boy are shown attempting to rake off his last few pennies.

Both his old wife and his young discarded lover are showing signs of distress at their inability to help him out this time (though the former might well be carping on at him directly into his left ear) and incipient madness is suggested by the telescope set up to poke through the bars and the alchemy experiment going on in the background.
Posted by Inner Diablog at 3:46 pm