If there is one movie you find yourself drawn towards this horror season, let it be this one. 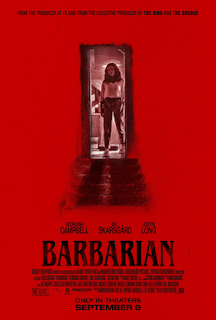 This was our second Airbnb-gone-horribly-wrong treatment, and by far the more satisfying of the two.

I won't say much more and whatever you do, avoid the trailer — in part because Barbarian has two very enjoyable sections that in a sense sit outside the gruesome genre action, and which require the viewer to closely observe the words and actions of a bloke — and any foreknowledge of the other stuff could spoil these.

The scenes that take up the first half hour or so before the the genre tropes are laid on far thicker are essentially a tense two-hander between the inexplicably double-booked Tess (Georgina Campbell) and Keith (Bill Skarsgård).

Direct Zak Cregger explained his inspiration in a recent interview...

"I had read a book called The Gift of Fear by the security consultant Gavin de Becker. There was a chapter in the book that was really primarily directed towards women, and he was encouraging women to pay attention to these little minor red flags that men can give off in day-to-day situations. They can be very innocuous things that you might not notice. Things like complimenting you when it's not necessarily appropriate or doing you a favour that you didn't ask for, or touching in a nonsexual way that's not initiated by you...All these little things that seemingly don't matter, but he was basically saying the gift of fear, it's important to pay attention to these little red flags because you're equipped with that to identify potential threats. As I was reading it, I just kind of had this epiphany that I don't ever have to think about that kind of a thing because I'm a man and because I have this level of privilege where I just don't have to consider that half the population might be somebody that means to do me harm for no reason. I just realized I occupy a completely different psychic landscape than most women do. It was kind of a big moment for me."