There were times when I almost laughed and others where I almost barfed. 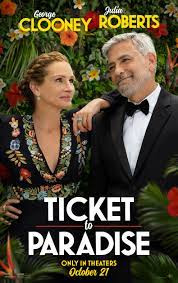 British film-maker Ol Parker has delivered this squirm-inducing kind sort of white sahibs encounter the tropics vibe before with his Best Exotic Marigold Hotel franchise — but at least those films were shot on location on Jaipur, whereas here we have a version of Bali largely realised in Australia with frequently painted-on CGI backdrops, and so all the just-so-adorable natives have had to be imported, but at least this has allowed Parker to show us a developing world with perfect hospitals.

Parker's retired Britishers undoubtedly had a measure of emotional depth and wit about them. Here though I'd be hard picked to choose which of these characters is the most annoying. I would admit however that I might have been on the whole less inclined to see it through to its inevitable conclusion if the role played by Clooney had been handed to a dimmer star.

Yet I suspect that a large part of the entertainment I experienced came via simultaneously daydreaming my own version of this story set here in Guatemala, with much less effort spent papering over the cracks in 'paradise', thus opening up the possibility of offending as many viewers as possible.

Posted by Inner Diablog at 8:27 pm