A new joint has just opened up (very) locally. 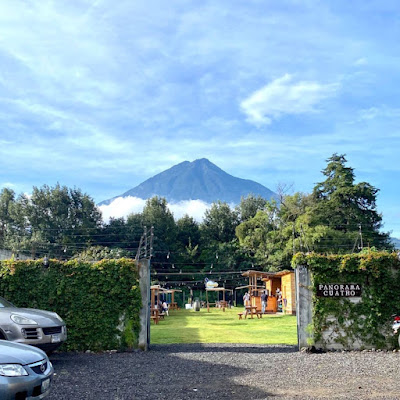 I'm thinking the Cuatro refers to the Four Horsemen of the Apocalypse, also known around here as Pizza*, Nachos, Burgers and Wings.

It would appear to presage a perfect storm of the sort of mundane multilateral dross that has inundated Antigua in the past few years.

The other day I ran into an old chum in town, a resident hailing from the States, who pined for the Antigua of old and suggested that he'd be gone within five years if the current trends persist.

"This used to be the Palm Springs of Guatemala for the wealthy elite," he freely exaggerated. More like a corrupt and crumbly version of the Cotswolds perhaps.

I have lately been blaming the pandemic for an acceleration of the downmarket trajectory, but after this exchange I started to wonder whether other factors have been equally crucial, such as the capital finally getting its act together in terms of offering genuinely sophisticated places to eat and drink and the sheer aggravation involved in making the journey by road nowadays.

Though in this country much that would be taken for sophisticated is in fact merely pretentious.

* My views on pizza are similar to my views on superhero movies — avoid unless one is certain of not suffering from buyer's regret.

Posted by Inner Diablog at 5:25 pm