On my second visit to La Antigua towards the end of ‘89, I came across a child apparently trapped in a state of permanent, unadulterated joy. This little boy with his own room in the Hermano Pedro hospital was living a life that approximated that promised by the Church in the next one, yet had been incarcerated as a non-person there by priests. 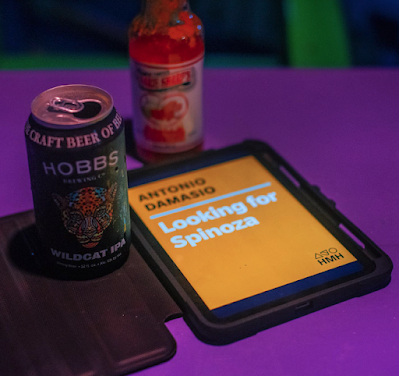 Renowned neuroscientist Antonio Damasio is the go-to guy for such aberrations, as he’s made a career of revealing how small defects in or injuries to the brain’s architecture can lead to quite dramatic personality changes, and how the selective application of electrical currents can induce happiness or indeed dark depression in the absence of other mood stimuli. In this book he declares a perhaps unlikely alliance with Baruch Spinoza, the Dutch Jewish metaphysical disrupter (1632-77), who wanted us to understand that the whole Cartesian mind-body dichotomy was hooey, for all of cognition necessarily encompasses the entire animal organism, which can claim no transcendent passenger. That Love is as much a feeling as it is a thought is the thought-feeling that Damasio runs with here, linking modern biological orthodoxy with a venerable heterodoxy. My own encounters with Spinoza began long ago when he seemed to offer an antidote to the neo-platonic model which had carried out a reverse takeover of Hebrew thought in the early Christian era. Not only did that leave us with bodies and souls, it left us with a contingent reality separate from, or subsumed within, something perfect and absolute to which we have given the name of God.

Spinoza’s rejection of this form of Divinity came with the insistence that the cosmos we can detect is all there is, and anything meaningful therein is immanent, taking shape within time and space not beyond it. Today his pantheism is taking some grazing impacts from western cosmology, which struggles to entirely shake off the thought-feeling that perception will only ever provide us with a partial take on reality.

Posted by Inner Diablog at 2:25 pm