After encountering an distasteful Tweet from 'across the pond yesterday, denouncing Rishi Sunak as the first pagan ruler of Britain for a thousand years — to which I replied that Charles III had the top job last time I checked — this morning I gave some thought to the question thus raised of which practicing pagan could indeed be said to be the last polytheist in charge of our island.

There were some early Anglo-Saxon kings that clung on to Tiw, Woden, Thor and Frig (Tuesday, Wednesday...), but none of them could claim sovereignty over more than a small portion of the land, many of whose occupants had some legacy of attachment to Romano-British monotheism.

So, the last pagan ruler of Britain has to be Constantine the Great himself, proclaimed Emperor here in the city of York, some time before his conversion to Christianity, at which point he then became the first Christian ruler of Britain. (The SNP may beg to differ.) 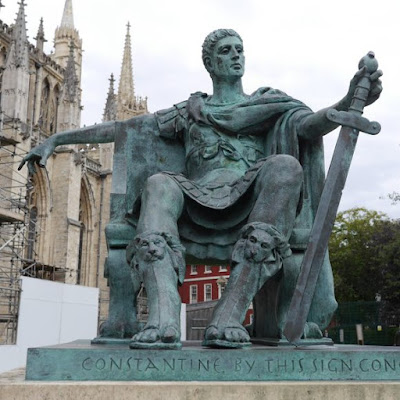 As for any atheist rulers of Britain, one has to delve a little below public performance and into private belief.

The only monarch ever to be (almost) open about their unbelief was William II Rufus, son of the Conqueror. Yet on her deathbed someone informed Queen Victoria that she was about to be reunited with her dearest Albert..and was duly told to take a hike.

Bad King John was excommunicated by the Pope and didn't seem to care all that much, and perhaps even more tellingly, when all the churches in England were consequently shut as a result and no masses were held for several years, hardly any of his subjects seemed to care that much either.

And if one allows for the fact that the PM is a 'ruler' rather than a mere public employee with some executive power (when permitted such by the more openly designated civil servants), one can point to the avowed atheism of Clement Attlee, the last godless occupant of No10, and Sir Keir Starmer, almost certainly the next one.

Nick Clegg was close enough. He now works for Meta and must be even more worried about job security than Rishi.

Posted by Inner Diablog at 5:34 pm