Proceeding with Thursday's topic of 'rulers of Britain' in danger of cancellation by certain members of the US Republican fringe... 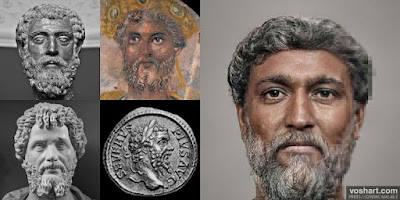 Our last ruler 'of colour' was Septimus Severus (above)*, an Emperor who died in the city of Eboracum (York) in 211 AD, having just embarked on an invasion of Caledonia (Scotland), which he'd hoped would indeed give him control of the whole of Britain.

He was born in what is now Libya and seized power shortly after the events depicted in Gladiator, though between Commodus and Severus, things had become a little messy.

Of course, several thousand years before Julius Caesar showed up, all of us Britons were 'of colour' — the gene for paler skin not having yet emerged — though it is unlikely that we were then able to agree upon a capo di capi.

Charles II was said to be a bit "swarthy".

The first de facto 'ruler of Britain' was probably the English monarch Edward the Elder (899-924), son of Alfred, whose sovereignty was (sort of) recognised by Constantine II of Scotland — at least according to the Anglo-Saxon Chronicle — but shortly afterwards Edward died in battle and we would have to wait a further 800 years for the United Kingdom, just after Scotland had bankrupted itself by attempting to colonise Panama.

The takeover was a little more friendly than Elon Musk's at Twitter HQ yesterday.

* Undoubtedly also a pagan, though most likely in that more open-minded Roman sort of way.