I can't really do much better than the Guardian's "more Styles than substance"*, yet I can point to the relevance here of Graham Greene's notion that America's depths are no different from its surfaces, for attempts to suggest hidden depth often result in a splendour of surface, as here.

That little plane in a nosedive was never really explained, but as most of us are aware how the big premiere at Venice went down, one suspects it must have contained the movie's press team... 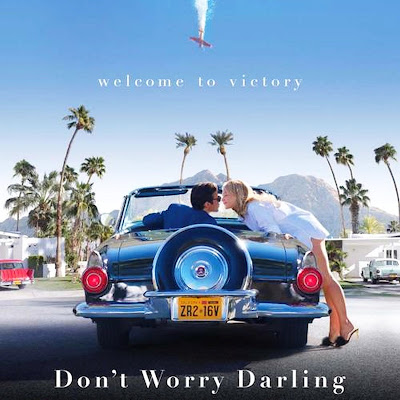 "People will look for drama wherever they can," observed Olivia Wilde in a recent interview, apparently in reference to the squalls of rumour and backbiting which were battering her production. In fact "drama" is a bit of a negative trigger word for V when it comes to cinematic entertainment, and in my outline of the synopsis I may have intentionally muddled the on screen narrative with the cast and crew kerfuffle and had to start again to make sure she was on board for our viewing.

Anyway, to start with, the underlying conceit of this story is somehow both too big and too small for a mainstream movie like this*. There's way too much that is a bit over-familiar, so one can conclude that perhaps the screenplay needed more space (or more work) to establish a claim to originality. (The Matrix also owed a debt to Plato, yet like the rest of western philosophy, did not feel quite so brazenly derivative.)

Latent within this tale is the possibility that one might choose the fantasy over reality, but it only pokes its head out properly in a frantic few minutes towards the end. (This is an important inferred theme, and one can consider how it has been handled elsewhere, e.g. the San Junipero episode of Black Mirror and the original Star Trek pilot with Captain Pike.)

There's an underlying feminist theme which is also not fully explored, the utopian ideal presented here, rather like the 1950s American suburban Shangri-La, being distinctly gender-biased, and yet not without ambiguities and satirical nettles which audiences members could have been encouraged to grasp.

There's an over-compensatory indulgence in visual metaphor (mirrors, circles and so on) and a disconnect between the way the mystery resolves and many of the apparently significant details accumulated beforehand — making this less of a big reveal, than the disheartening revelation of the film's inner inconsistencies.

Watching Dahmer recently, I concluded that it's a always a bit of a red flag when the production design is the best thing about the production. Everything about Victory stoked recollections of the 50s time-capule that is Cuba, particularly the Punta Gorda peninsula beneath Cienfuegos... 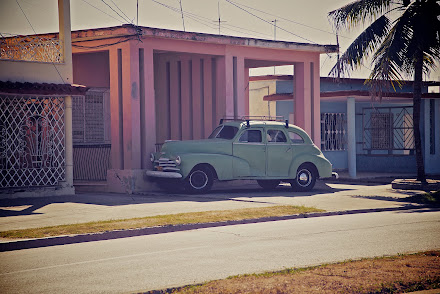 Florence Pugh —  now aka "Miss Flo" — is superb, as usual. It's rather a shame that she she seems to have disowned this performance, though the scandal has contributed to her exposure.

* Not a bad description of the man himself either.

** Extending the mystery across a long form TV series format would have resulted in predictable frustration though.