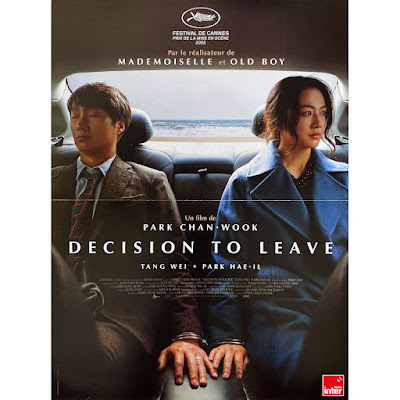 Of Chan-wook Park's new (and magnificent) movie, for which he won 'Best Director' at this years's Cannes, Peter Bradshaw observes: "This is the kind of Hitchcockian film made by someone who hasn’t necessarily seen a Hitchcock film before."

There is NO way, Park hasn't absorbed any Hitchcock, and there are very specific references to Vertigo in Decision to Leave, but what the Grauniad's critic probably intends with that remark is that the conceptual source is rather like my pre-mammalian ancestors: detectable, but latent within something striving to be a far more intricate, breakthrough form.

I was not going to write any sort of review just yet, because I am not sure that I yet have had the full experience. The hard-coded subtitles represented, as V would say, a traducción del culo, resulting in the dialogue and exposition equivalent of watching this visually-stunning film via an illicit camcorder recording.

I have never felt more frustrated that I cannot understand Korean, and was led to reflect on all the great Spanish-language movies that have really got under my skin over the decades, which might have seemed merely rather good if I had not been tuned into all the nuances of the language. (And it would seem that there are some significant nuances here, especially in the vocab and intonation used by Song Seo-rae.)

The subtitle problem exacerbated some of the confusions inherent in Park's playful yet experimental style, which left us both good-confused and bad-confused at various points in the action and yet unable to discern how much of that was entirely intentional (or indeed, necessary).

Park is undoubtedly taking some of the very familiar tropes of the Noir genre and seeing how he might tell this kind of story using strikingly fresh cinematic idioms.

I doubt any of us will have come across a better stab at representing social media interactions in this medium.... 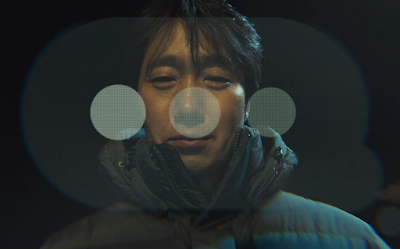 So, other than to say that the central performances are superb and I now going to have to back-track to see Tang-Wei in Ang Lee's Lust, Caution — which I somehow missed back in 2007 — that's it for now, as I need to find some less opaque subs. 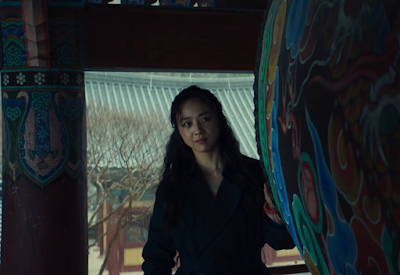 Posted by Inner Diablog at 3:45 pm