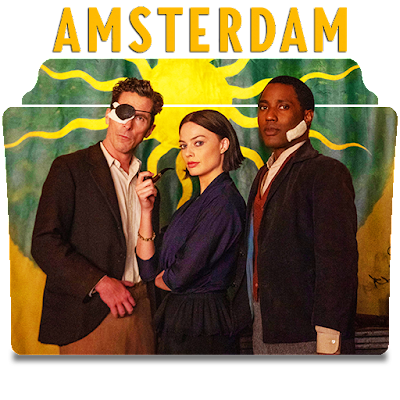 On a review show I occasionally tune into it was noted that with a collection of big name thesps like this, one could make just about any kind of movie one wanted to.

The trouble with Amsterdam is that individually and collectively its cast has seemingly not reached agreement on what sort of movie this one actually is. *

Two of the three leads have responded to the often bland, expositiony screenplay by goofing up their performances awkwardly.

Then there is the problem that the parts of the story that this movie needs to take seriously, are not taken seriously, and one is left with the sense that David O. Russell is only addressing them at all, because they have some relevance to the present situation.

I'm not entirely sure how to quickly summarise what isn't really working in Amsterdam, but the name of the film perhaps provides a clue. The short sequence of scenes set in that city could have been shot anywhere. Yet this interlude between the war and the plot back home needed to be both written and represented far more finely. The bohemian idyll shared by the members of the tripartite pact might have been the key to understanding and caring more about these characters than we ultimately did.

Anyway, in spite of these failings it is not un-enjoyable, and some will no doubt enjoy it even more for the way Taylor Swift's cameo comes to its sudden conclusion.

* And De Niro rather obviously cares the least of them.